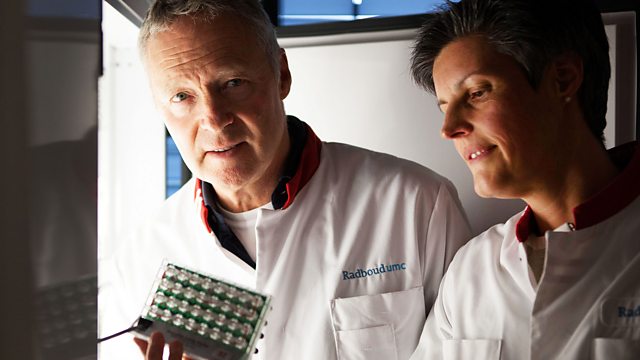 ADHD and Me with Rory Bremner

Comedian and impressionist Rory Bremner is on a personal mission to uncover the science of ADHD (attention deficit hyperactivity disorder), a condition which he suspects he has.

Comedian and impressionist Rory Bremner is on a personal mission to uncover the science of ADHD (attention deficit hyperactivity disorder), a condition which he has suspected he has. In this film, Rory learns about the science of ADHD, goes for a diagnosis and tries the drug methylphenidate (also known as Ritalin) for the first time - just before walking on stage.

Around three per cent of the adult population suffer from ADHD (and five per cent of children), yet many people remain sceptical of its existence, blaming it on naughty children or bad parenting. This film looks for the solid scientific evidence that ADHD does exist as a distinct disorder in the brain and the implications for those people suffering from it. In Rory's case, he believes that the random associations it throws up feed his comedy.

But for people with more severe ADHD, the consequences can be extremely serious. Incredibly, almost 30 per cent of adult prisoners have ADHD - we meet someone who has consistently been in trouble with the law, whose potential career as an England hockey player was blighted by her impulsive behaviour. We trace the biological origins of ADHD and find out that far from it being a modern disorder, doctors were already describing it in 1775. From today's research, we see the clear differences in the brains of people in ADHD and discover how the genes involved are being identified by research on flies, which have been genetically modified to be hyperactive or inattentive. Rory comes to see it is a complicated condition, different in almost everyone who has it, due to the interaction of the many genes involved with the environment.

Rory tries out treatments for ADHD - taking methylphenidate for the first time, as well as trying out an experimental form of brain training. Finally Rory finds out why ADHD exists at all - it seems that while it may be bad for the individual, some scientists believe it may have helped society by providing risk-takers who - like minesweepers - identify dangers and map out boundaries, to the benefit of the rest of us.

See all clips from ADHD and Me with Rory Bremner (3)

Rory and Professor Peter Hill bake a series of gingerbread men to help explain the different factors that contribute to ADHD; here’s the recipe they started with.