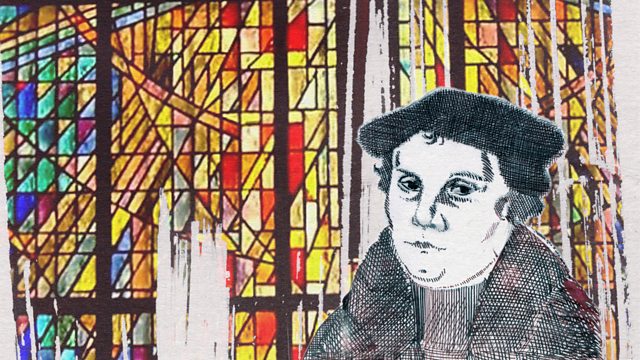 The Rev Lucy Winkett takes a musical tour of the Reformation, visiting places in Germany where people such as Martin Luther, Bach and Johann Walther lived and worked.

The Protestant Reformation has traditionally been regarded as "the triumph of the word", marking a decisive shift from a visual and sensual culture to a literary one. But for Martin Luther, music, with its power to move emotions, was an "inexpressible miracle" second only to Theology. When people engage in music, he said, singing in four or five parts, it is like a "square dance in heaven."

Luther's ideas about music were to have a decisive influence on the development of music in Germany. Indeed, the dominance of German music from the 17th to 19th centuries would not have happened without him. The English and Scottish Reformations, which took a Calvinist route, were untouched by this influence. It took until the 18th century for the hymn-writing Wesley brothers to do for England's churches what Luther had done for German ones two hundred years earlier. The Lutheran Church, with its hymns and chorales, was the seedbed for the choral and liturgical works of Germany's greatest composers. No Luther, no Bach. It's that simple.

The Rev Lucy Winkett, a trained singer and Bach enthusiast, takes the listener on a musical tour of the Reformation. The programme opens in the Georgenkirche in Eisenach where Martin Luther and J.S Bach were both choirboys. Lucy visits Torgau, where the first Lutheran cantor, Johann Walther, set Luther's famous words to music and spearheaded the educational reforms which led to an explosion of choral singing throughout Saxony. The programme ends in Leipzig at the Thomaskirche, where Bach wrote his famous cantatas and other works based on Lutheran liturgy.

Music for this programme has been specially recorded with the choir of Gonville and Caius College, Cambridge, under the direction of Dr Geoffrey Webber.

v. is for Tony