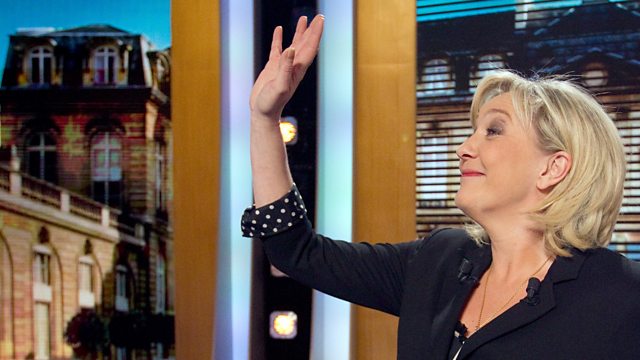 With the French elections fast approaching, and Marine le Pen continuing to prove popular in the polls, many commentators are suggesting that if she does win, or come close, it will be thanks to a disillusioned working class shifting its allegiance wholesale behind the Front National. Professor Andrew Hussey argues in this programme that such a reading is far too simplistic. While it's true many people will give le Pen their vote, he says that there are many more who will not, partly thanks to generational allegiance to the left, but also more interestingly because of the power of 'la culture populaire'. He visits the north of the country, the area where much of its industry has been traditionally based, and the setting for not only Edouard Louis' powerful recent novel 'The End of Eddy', but also the film 'Chez Nous' about a nurse who becomes a Front National representative. Andrew speaks to its star, Emilie Dequenne, about the reason people are tempted by le Pen's message, and hears from its director Lucas Belvaux and producer David Frenkel about the power of culture as a political weapon. Andrew then returns to Paris, to talk about not just the influence of music, comedy and TV, but also the lived culture in the markets and the streets of his own arrondissement just inside the southern Périphérique. The rich diversity and mixture of the people and the lives being lived here offer, he argues, a different and compelling narrative of France that is troubled, certainly, but for the most part functioning and powerful enough to withstand the advances of the far right.