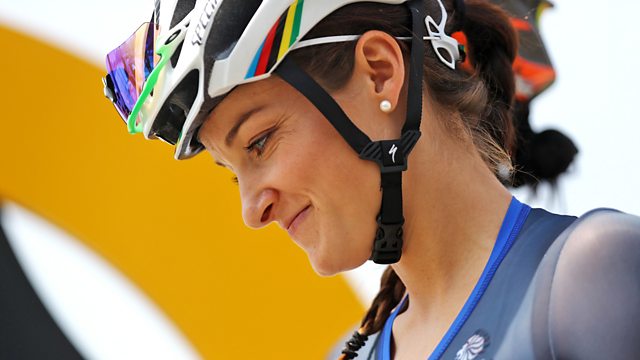 Lizzie Armitstead on drug tests and sexism in cycling; domestic violence on telly; 'Please offer me a seat' badge; are sex robots a dangerous distraction from human intimacy?

British cyclist Lizzie Armitstead's career was thrown into turmoil when just before the start of the 2016 Olympic Games in Rio the press revealed that she had been investigated for missed drugs tests and was only competing after an appeal cleared her name. The backlash was immense. Now that Lizzie has published her autobiography Jenni talks to her about what happened and why and the reports of sexism that she includes in her book.

Big Little Lies, Coronation Street & the musical Carousel all contain storylines about coercive control & domestic abuse. How important is it for people to experience the unpicking of the complexities around these desperate situations? And what about the responsibility in how these relationships are depicted? Jenni is joined by Polly Neate, the Chief Executive of Women's Aid and cultural commentator, Karen Krizanovich.

A 'Please Offer Me a Seat' badge for those less able to stand on public transport is being launched by Transport for London on Friday. We hear from Amanda, a cervical cancer survivor who still experiences pain following radical surgery, and Amy, who suffers with Lupus, on the challenges they face on public transport with a 'hidden' illness.

The race is on to develop the first commercial sex robot for the mass market & an American company may have one for sale later this year. The journalist Jenny Kleeman has visited the factories where these robots are being developed and she joins Jenni to describe the appearance and technology of these machines. Is the robot the ultimate in sexual objectification or an opportunity to improve our experience of sex & intimacy? Jenni is joined by Dr Kathleen Richardson, Senior Research Fellow in the Ethics of Robotics, and Dr Kate Devlin, Senior Lecturer in Computing.