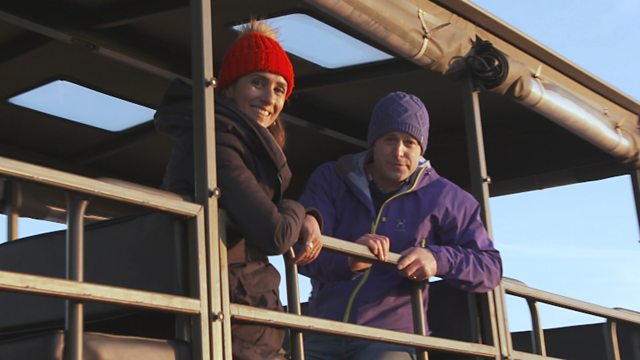 Matt, Anita and John are in Holderness in the East Riding of Yorkshire. Matt is on Spurn Point, which is now the country's newest island.

Matt, Anita and John are in Holderness in the East Riding of Yorkshire. Matt is on Spurn Point, or rather Spurn Island - the country's newest, formed by the big storm surge of 2013. He meets the RNLI crew who had to relocate further up the coast as a result and then goes on manoeuvres with them 'sniffing the channels' as they look for safe passages around the point.

Anita finds out how Spurn's wildlife has responded in the wake of the surge, and she meets the next generation of birdwatchers helping to spot the rare species on display.

John is on Sunk Island, an area of rich farmland attached to the mainland but which once stood cut off in the Humber. He is there with photographer Fiona Caley, who is recording this mysterious landscape and the farming communities who live there.

And when milk quotas ended two years ago, some dairy farmers here and across Europe thought the sky was the limit. But in the Netherlands that has suddenly changed, and it could be a cautionary tale for us in the UK as Tom Heap finds out.

Anita is on Spurn Peninsula, at the Southern tip of Holderness, visiting the National Nature Reserve with Andy Gibson, from the Yorkshire Wildlife Trust. She discovers why it’s so important to help create new wetland habitat for the thousands of wading birds at Spurn, due to an ever-changing coastal landscape, at the constant mercy of the sea. She joins Steve Crawford from Surfers Against Sewage in their fight against marine litter on Spurn, for one of their annual Big Spring Beach Cleans.

Tom Heap’s travelled to the Nertherlands, where the dairy industry has come to a grinding halt. After years of expansion, the country’s herd is producing too much cow muck and it’s harming the environment. The solution is extreme, the Dutch government has ordered around two hundred thousand cows must go either to slaughter or out of the country. But what does this mean for the UK’s dairy farmers, given that we also have pollution problems from slurry?

Matt takes a bumpy ride out to Spurn Point to visit the crew of the Humber Lifeboat Station, the UK’s only full-time, paid coastal Lifeboat Crew. He joins Coxswain Dave Steenvoorden to find out about the remarkable history of the community who once lived at the station, before it became too difficult to access. Matt discovers what life is like for the crew here, now their families are gone and how the changeable conditions make for an exciting daily routine!

Sunk Island is neither sunken nor an island, but is, as John Craven discovers, a remarkable agricultural landscape with a rich history. With vast tracts of pancake-flat land and skies that go on forever, the extraordinary panoramas of Sunk Island are the inspiration for local photographer Fiona Caley. The daughter of a Holderness farmer, Fiona’s ongoing project records the lives and landscapes of this fertile land.

Anita is back at Spurn for one of its wildlife highlights, the spring bird migration. She catches up with Paul Collins from the Spurn Bird Observatory and lends a hand monitoring the migrant bird populations. Anita then meets two young birders hoping to inspire a new generation with the help of social media.

White Park cattle have been a part of Adam’s life for as long as he can remember. His dad, Joe, first brought them onto the farm when he was a boy, and just six years ago Adam lost almost half his herd to TB. So when a friend asked him to find some prize White Parks, Adam new just where to go, John Lean’s farm in Devon. After admiring John’s quality herd, Adam heads to London to meet top butcher Nathan Mills who shows him why White Park is one of the best steaks you can buy. So good in fact, it was knighted by Royalty in the 16th century, hence ‘Sir-Loin’… apparently!

Where the Humber Estuary meets the North Sea, the constantly evolving coastline must be monitored all the time, to ensure the Humber Lifeboat and her crew have a clear, safe passage out to sea. Matt takes the wheel on the ‘Pride Of The Humber’ under the watchful eye of the Lifeboat Crew, as they head out to ‘sniff the channels’ and assess access in and out of the Estuary around the notorious Stoney Binks sand banks. With about two hundred-thousand tonnes of shipping passing Spurn point each day, they’d better get it right!