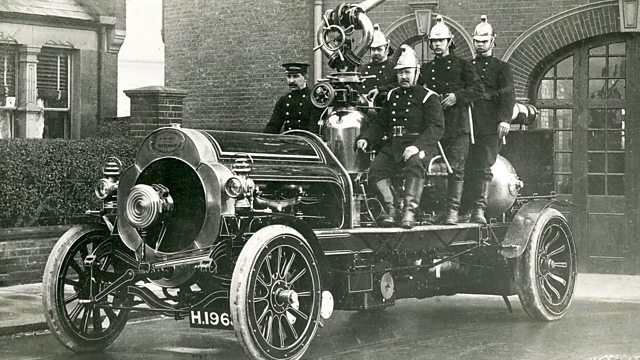 Blazes and Brigades: The Story of the Fire Service

Timeshift looks back on nearly two centuries of British firefighting, exploring how major incidents and the evolution of equipment have helped forge the modern fire service.

Timeshift looks back on nearly two centuries of British firefighting, and explores how major incidents and the evolution of equipment from manual pumps to motorised fire engines have helped forge the modern fire service.

The founding father of modern firefighting was Scotsman James Braidwood, whose pioneering techniques helped save Westminster Hall when the Houses of Parliament were consumed by fire in 1834. Remarkably, London had no publicly funded fire service at the time - and it was only after Braidwood's death tackling a warehouse blaze nearly 30 years later that the Metropolitan Fire Brigade was created.

The fireman soon became an iconic figure of heroism in Victorian painting and popular literature - but the provision of fire brigades and the standard of their equipment varied widely across the country. Motorised fire engines were available from the beginning of the 20th century, but it took the arrival of World War Two for the fire service to be organised on a national footing. Professional and volunteer firefighters worked side by side to tackle the devastating incendiary bombs dropped on British cities by the Nazis. Doug Lightning, the last surviving firefighter of the Sheffield Blitz in December 1940, recalls his own experience of helping to save key buildings during the attack.

In the post-war years, improvements to the fire service saw the introduction of new equipment, including the state-of-the art Dennis F7 fire engine - we take one of the last surviving examples back on the road in Manchester. Firemen were also called on to help with non-fire-related disasters. Interviewee Brian Sadd recalls the exploits of his father Fred during the floods that hit the east coast of England in 1953. Fred rescued 27 people, was awarded the George Medal and became the star of a comic strip in The Eagle.

A series of tragic incidents in the 1960s raised awareness of the importance not just of tackling blazes but of fire prevention. However, Britain was unprepared for the record hot summer of 1976, when a series of fires swept through the countryside. We speak to Mary-Joy Langdon, who in volunteering to help became Britain's first female firefighter, heralding changes to what was once seen very much as a man's job.

But the service wasn't immune to the industrial unrest of the decade. 1977 saw once tight-knit teams divided by the first national firefighters' strike, the film explores the media and public reaction to this unprecedented event. With the strike resolved, technology and equipment continued to improve in the 1980s, spurred on by a series of high-profile tragedies, culminating in the King's Cross underground station fire of November 1987, in which 31 people lost their lives, including one of the first firemen on the scene.

The King's Cross disaster led to a further overhaul of fire safety regulations. Today there are more than 50 regional fire services in the UK, dealing with nearly 2,000 call-outs a day. Increasingly, fewer of these are to actual fires. Firefighters respond to a range of incidents from road traffic accidents to terrorist attacks and natural disasters, and in recognition of this, in 2004 the service was officially renamed the Fire and Rescue Service.

Dial "B" for Britain: The Story of the Landline—Series 17

See all clips from Blazes and Brigades: The Story of the Fire Service (2)