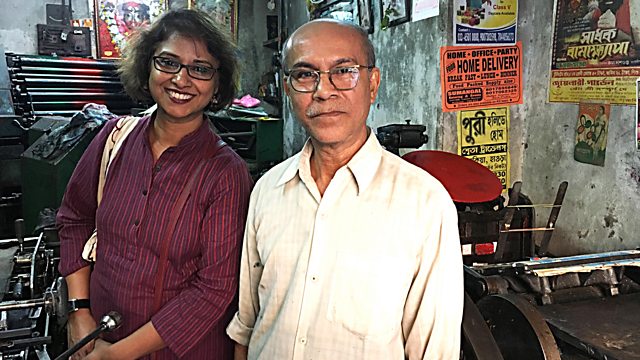 Anindita Ghosh travels to Kolkata, to explore the explosion of printed material in 19th-century Bengal following the setting up of the first presses by missionaries in India.

Dr. Anindita Ghosh from the University of Manchester explores the impact of the printing press on India and argues that print, much more than railways as is commonly understood, gave birth to the Indian nation that was born in 1947.

In her first programme, Anindita explores the 'Renaissance' that came about through the medium of print in India. She travels to Kolkata, formerly the capital of the British Raj, to explore the tremendous explosion of printed material in nineteenth century Bengal, following the setting up of the first presses by missionaries in India.

The colonial government needed English speaking Indians to work its administrative apparatus and a proliferation of English printed material followed. But this was not a passive process. Indians in turn participated in the intellectual revolution to form their own thoughts on society. The search for a putative 'Indian' identity that followed, known today as the Bengal Renaissance, was very much shaped through an exchange of ideas via printed texts.

A sea of Indian-run presses, printing in local languages, furthered the cacophonous print revolution and, by the end of the nineteenth century, more titles were produced in India than in France during the Age of Enlightenment. By carrying the printed word to more popular levels of readership and extending the networks of the reading community, Anindita argues, these were connections that were to prove vital for the formation of the nation in 20th century India.

See all episodes from Printing a Nation