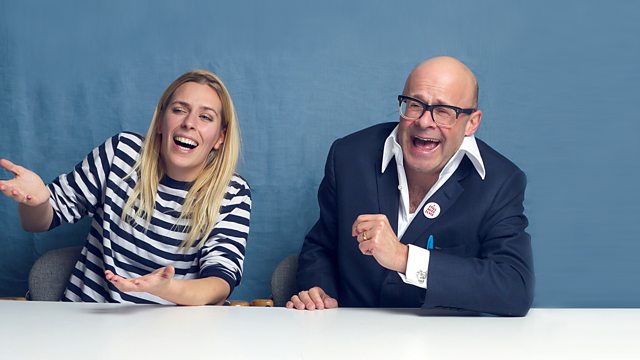 Harry is the very first comedian that Sara ever saw live. They discuss Gogglebox, constructive criticism, remaking the Godfather and the merits of sharks.

Chain Reaction is the talk show with a twist where one week's interviewee becomes the next week's interviewer. John Cleese was first in the hot seat back in 1991 and since then, a procession of big names from the world of comedy and entertainment including Jennifer Saunders, Jarvis Cocker and Eddie Izzard have helped continue the chain.

Harry Hill is an award winning comedian and world-class swingball player. Born in Woking in 1964, he holds a medical degree from the University of London. His books include Flight from Deathrow and Tim the Tiny Horse. He has been a stand-up since the early 90s and is well known as the star of TV Burp and the voice of You've Been Framed. Harry can currently be seen on Alien Fun Capsule.

Sara Pascoe is a comedian, writer and actor known for her acclaimed live shows - Sara Pascoe the Musical and Sara Pascoe vs History to name just two - as well as numerous high profile TV appearances on programmes ranging from Live at the Apollo, Never Mind The Buzzcocks and W1A. Her debut book Animal: The Autobiography of a Female Body was released in 2016.

A BBC Studios production for BBC Radio 4 in March 2017.