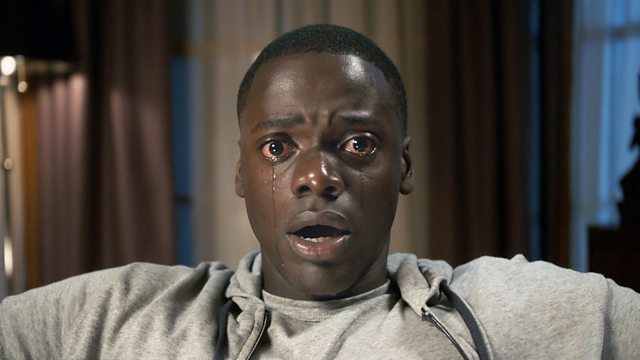 Get Out, Lost Without Words, Compton Verney, Music Streaming

Daniel Kaluuya in Get Out, Joan Bakewell discusses older people on stage, Creating The Countryside at Compton Verney and could streaming services be changing the music we hear?

Daniel Kaluuya stars in Get Out, director Jordan Peele's racial satire about contemporary America. Already a hit at the US box office, the casting of a British actor in a film about US race relations has sparked debate about the number of roles for black actors. Film journalist Ashley Clark has the Front Row review.

An experimental production at the National Theatre has no script and features a cast in their 70s and 80s. Director Phelim McDermott, actor Anna Calder-Marshall and Joan Bakewell discuss how issues facing older people can, and should, be shown on stage.

Kirsty visits Compton Verney's exhibition Creating The Countryside, which examines how artists have represented the great outdoors, from Gainsborough to Grayson Perry. Also part of the new season is The Clearing, a vision of how we may have to live if sea levels rise and petrol pumps run dry. Artists Alex Hartley and Tom James explain.

And Front Row continues to look at what the charts reveal about pop music today. Laura Snapes argues that streaming services are changing the music we hear.

Get Out opens in UK cinemas on 17th March certificate 15.
Main image above and image left: Daniel Kaluuya as Chris Washington in Get Out
Image Credit: Universal Pictures

Creating the Countryside: Thomas Gainsborough to Today is at Compton Verney from Saturday 18th March until Sunday 18th June