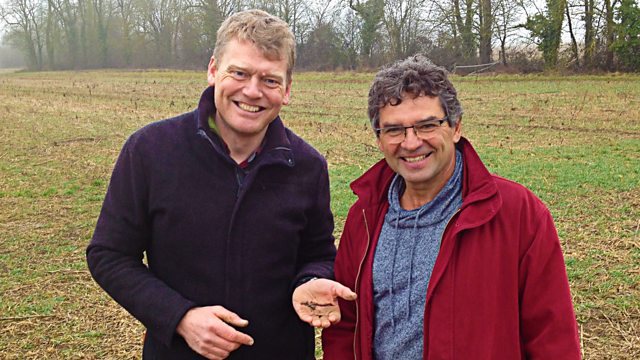 Can soil play a role in the fight against climate change? Tom Heap finds out how farmers are putting carbon dioxide back below our feet.

Can soil play a role in the fight against climate change? Our soils are the biggest store of terrestrial carbon on the planet. This crucial non-renewable natural resource is under threat, and millions of hectares of farmland are lost every year through erosion and degradation of topsoil, releasing significant quantities of carbon dioxide back into the atmosphere.

The French Government believes that soil can play a significant part in keeping the rise in global average temperatures below 2 degrees. They've introduced an initiative called "4 per 1000", which aims to improve the organic carbon matter in soil stocks by 4 parts in 1000 per year. They claim such an increase in soils around the world would be enough to offset all human emissions of greenhouse gases each year. Tom Heap talks to scientists and farmers to find out what can be done to put carbon back below our feet.