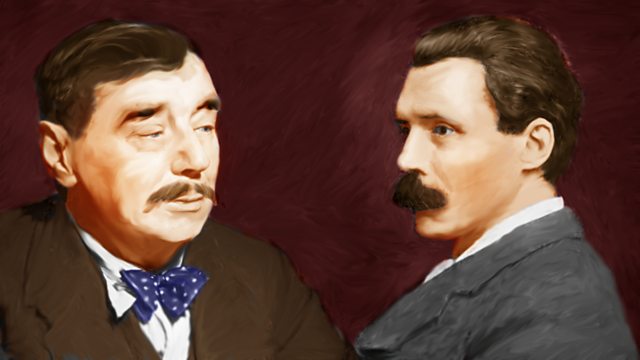 Two writers, HG Wells and George Gissing, are at a crisis point in their lives and each would like to be more like the other. Starring Julian Rhind Tutt and Joseph Millson.

Martyn Wade's play brings H.G. Wells and George Gissing together with some lovely comic moments. Each man would quite like to be like the other. Wells is weary of space and time travel and Gissing has no money. A surprising but long lasting friendship develops at a time when both writers are at a crisis point in their lives.

Through friendship with George Gissing, H.G. Wells begins to confront his doubts and difficulties and discovers a new direction for his writing, and an unconventional approach to married life. Wells's career - thanks to his run of futuristic novels - is successful and making him lots of money. By contrast, Gissing's depictions of poverty, depression and failure have failed to bring him financial rewards. But Wells is at crisis point. Confused and uncertain. Weary of space and time travel. Dissatisfied with his marriage and this is his second attempt at marital bliss. The friendship with Gissing throws Wells into turmoil. It's time for him to take stock and be honest with himself. As the friendship develops so each writer begins to reveal more. Gissing sets Wells on a new literary path and he begins work on writing about real life (particularly his own) in Love and Mr Lewisham. Wells tells Gissing he should relieve the gloom of his next novel with a little humour and a few rays of sunshine - but Gissing won't oblige. Is Gissing being completely honest with Wells or holding something back? Gissing has found a new love and his work does begin to change direction too but an air of melancholy still hovers around him. Why?