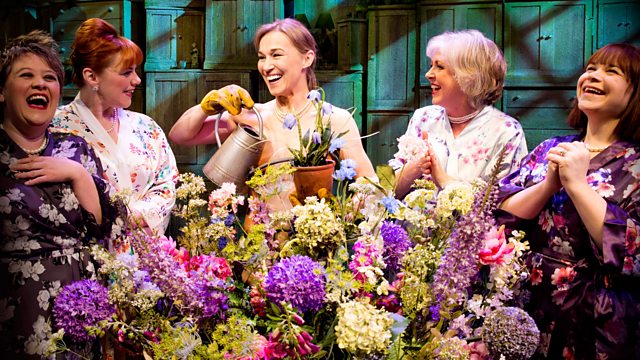 Reassessing body confidence with Gary Barlow as his first musical, The Girls, opens; a touch of Bond in the TV version of SS-GB; Sidney Nolan's paintings; The Great Wall reviewed.

Gary Barlow has written his first musical with his long-time friend, the screenwriter Tim Firth. The Girls, like the film Calendar Girls, charts the true life story of a group of friends who meet at the Burnsall Women's Institute and decide to pose for a nude calendar to raise money for charity. Gary and Tim discuss stage nudity and body confidence, and meeting the real Yorkshire 'girls'.

The new five-part TV drama series SS-GB imagines the UK under Nazi occupation in 1941 after the Germans won The Battle of Britain. The writers Neal Purvis and Robert Wade, who wrote the last six James Bond films, discuss this adaptation of the 1978 Len Deighton thriller, and their approach to re-imagining history.

Famous for his paintings of Ned Kelly, Sidney Nolan is often seen as the most prominent Australian painter of the 20th century. Yet he spent most of his life in Britain recreating the landscapes of his birth country from his imagination. Art critic Richard Cork reviews Transferences, a new exhibition at Pallant House Gallery, Chichester, which kicks off a year of events marking the centenary of the artist's birth.

Veteran director Zhang Yimou and Hollywood star Matt Damon have teamed up to create The Great Wall, a film spectacular set in ancient China, which sees European mercenaries and Chinese soldiers working together to defeat a mythical horde of ravening beasts. It's the largest Hollywood co-production to be filmed entirely on location in China. Film critic Angie Errigo reviews.

Gary Barlow and Tim Firth's musical The Girls is at the Phoenix Theatre, London until 22 April 2017.