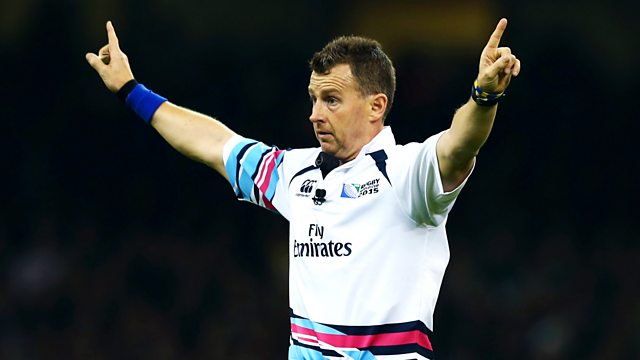 His steely authority and quick wit on the field have won him worldwide praise - he's widely regarded as one of the best referees in the business for the impact he makes on the flow and coherence of a game. In 2015 he became the second Welsh official since 1991 to referee a World Cup Final - in a memorable match between New Zealand and Australia.

Born and raised in a small village in Carmarthenshire, he first picked up the whistle aged 16, when it became clear to both his teacher and himself that he wouldn't make much impact as a player.

A former school technician and farm worker, he broke through onto the international refereeing circuit in 2005 and took charge of his first Test when Japan hosted Ireland in Osaka that summer.

In 2007 he became one of the first high-profile sports professionals to come out as gay - a courageous move in a sport which often defines the word macho. He has spoken about this decision as being the biggest challenge he has ever faced - even more so than officiating an international match under intense scrutiny in front of 95,000 spectators and a global TV audience. The severe depression he experienced coming to terms with his sexuality culminated in an attempt to take his own life in his twenties.

He now says the unwavering support he has received from the rugby authorities, the players and the fans has enabled him to be true to himself and carry on working in the game he loves.

See all clips from Nigel Owens (2)