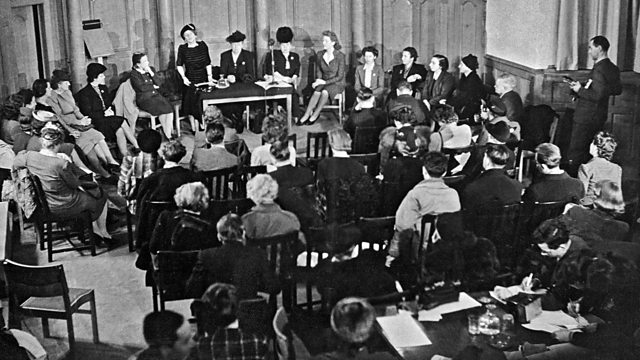 Madeline Fontaine on designing costumes for the film Jackie. A mother's account of being a young widow. Muslim women in the US and the women who founded the United Nations.

The Widowed Parent's Allowance, the safety net that parents get because of the National Insurance contributions their husband or wife made before they died, is being replaced by a new Bereavement Support Payment from 6 April 2017. Jenni talks to Alison Penny from the Childhood Bereavement Network and Georgia Elms whose husband died in 2006 and is now chair of WAY Widowed and Young about the impact the changes will have.

Costume designer Madeline Fontaine speaks to Jenni about creating her Oscar and Bafta nominated designs for the film Jackie.

Three Muslim women from North Carolina talk to Kirsty Starkey about what it's like to be an identifiable Muslim woman in the United States today.

As part of our Woman's Hour Craft Prize coverage, Jane Garvey sees some contemporary craft from around the world at Collect, at the Saatchi Gallery in London with Daniella Wells from The Craft Council. The exhibition is open to the public until 6th February.

Nikki Haley former governor of South Carolina has just started work as US ambassador to the United Nations. She is the third woman in a row to hold the title but women were central to the development of the United Nations from the start. These included British women Ellen Wilkinson and Florence Horsbrugh who were both present at its foundation. Jenni speaks to Dr. Heidi Tworek Assistant Professor of International History at the University of British Columbia about the women who helped to found the United Nations and about the challenges that Nikki Haley is likely to face.

Transgender and planning a family; Banning the term "honour killing"; And older models.

SUPPORT FOR WIDOWS AND WIDOWERS

You can find more information and help at;