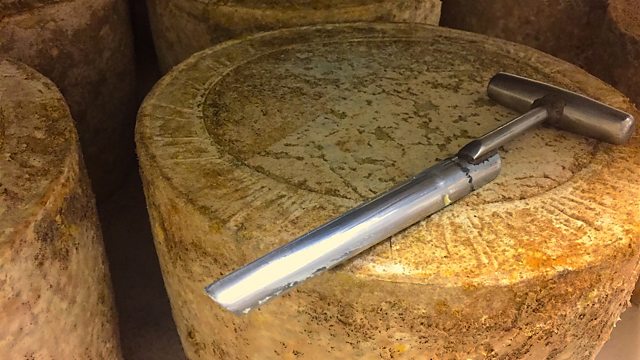 Sheila Dillon goes back to her food roots in Lancashire - and discovers the ideas and flavours that this county has to offer the world.

Sheila Dillon returns to her food roots in Lancashire, meeting people doing and creating extraordinary things - from food producers, to cooks to campaigners. As nominations come in for the 2017 BBC Food and Farming Awards, celebrating people and businesses from all over the UK - Sheila is taking the opportunity to celebrate the county she grew up in, and is going on a road trip through the county of the Red Rose.

Graham Kirkham makes an unpasteurised Lancashire cheese near Goosnargh that's now celebrated far and wide - but things were nearly a very different story. Ian and Sue Steel made an audacious offer to a coffee merchants that was founded in Lancaster in 1837. They're now running a business with their two sons, that's growing and thriving, and are guiding that deep history into a new caffeinated future. Every region needs a storyteller for its food, and for Lancashire that person is Nigel Haworth, respected chef based at the Michelin-starred Northcote - who opened a pub in the Ribble Valley in 2004 specifically highlighting local produce and local producers, which was truly groundbreaking at that time.

Kay Johnson is a food campaigner who grew up in Lancashire, worked abroad, and came back to the county six years ago. Noticing a deep disconnect around food, she's working to reconnect people, food producers, and the fresh local produce of the region. Kay draws direct inspiration from a social reform movement that was involved with setting up the Sailor's and Soldier's Free Buffet that operated at Preston station during World War One. Sheila meets James Arnold, history curator at The Harris in Preston, on the platform to find out the remarkable story of what took place.

Ingredients:
To cook the beetroot:

1. Cover a small tray with rock salt and place the beetroots on to the tray. Cover with tin foil and cook in the oven at 190C for 30 – 40 mins until soft
2. Remove from the oven and cool. Once cool peel the skin away from the beetroot and reserve
3. To reheat the beetroot place separately in boiling lightly salted buttered water. When the beetroot is hot remove and place them on a tray lined with a j cloth and keep warm.


To make the cheese fondue:

1. Bring to the boil the white wine, cream, vegetable stock and garlic
2. Once the liquid has boiled whisk in the grated cheese
3. Whisk until all the cheese has incorporated, season with salt
4. Whisk in the fecule to thicken, blitz with a stick blender and check the seasoning, then set aside.

To garnish:
To serve:
In the bottom of a bowl, place a piece of red, yellow and white beetroot. Quickly blitz the fondue, pour in to a jug and serve. Garnish with the chervil and slices of raw beetroot.