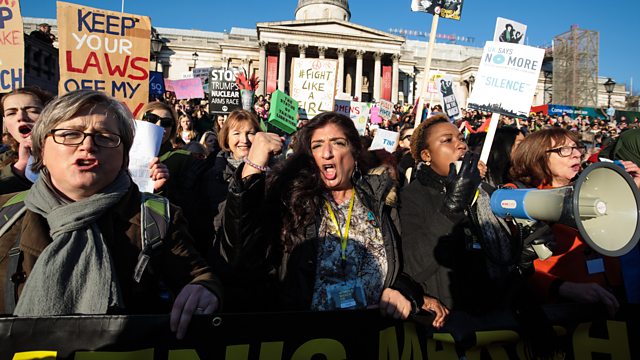 Women's marches, Deborah Lipstadt, How to slow down the ageing process

Nobel Prize winner Dr Elizabeth Blackburn on her discovery of Telomeres, the 'shoelaces', or protective caps at the end of chromosomes, which help to slow down the ageing process.

Women's Marches: We hear from women who took part in the US and the UK, in Washington, Barnstaple and Liverpool.

Professor Deborah Lipstadt was sued by the historian David Irving for calling him a holocaust denier. As a new film about the trial is released Deborah Lipstadt talks about why she think the judgment is even more relevant in our 'post-truth' times.

Writer Ali Land spent a decade working as a Child and Adolescent Mental Health Nurse before writing her first novel, Good Me Bad Me, which is narrated by a teenager who struggles to break free of her dark family history after turning her mother - a serial killer - into the police.

Nobel prize winner Dr Elizabeth Blackburn, co-author of The Telomere Effect, has discovered Telomeres, the 'shoelaces' or protective caps at the end of chromosomes which help to slow down the ageing process. She talks to Jane about how she believes her discovery could help you to live longer and look younger.

The Abortion Act 50 years on

See all clips from Women's marches, Deborah Lipstadt, How to slow down the ageing process (2)