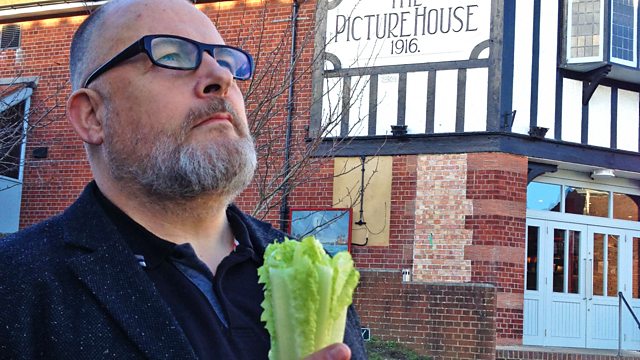 Peter Curran investigates the history and psychology of our 100-year-old compulsion to consume snacks and movies at the same time.

Peter Curran investigates the history and psychology of our 100 year-old compulsion to consume snacks and movies at the same time.

Peter hangs about cinemas finding out how eating and watching interact in the dark. Why popcorn? Why eat at all? Among those answering the questions, Game of Thrones star Iain Glen reveals how he deals with noisy eaters and Andi Oliver, cook and great British menu judge, creates a bespoke 21st century cinema snack with a delicious, but hefty calorie tariff, aimed at silent scoffing.

On a visit to the Popcorn Museum Peter discovers how the yellow stuff, originally a street food, was brought into cinema foyers during the great American depression of the early 1930s. The arrival of the "talkie" helped the cravers of the crunchy. A new breed of hungrier, less literate cinemagoer could enjoy movies now that the ability to read cue cards was a thing of the past.

The idea of unhealthy cinema food is a post-War concept and, in 1939, The Ritz cinema in Belfast offered Dover sole, roast beef and a wide selection of vegetables for lunch, dinner and supper - a far cry from the nachos and chemically enhanced cheese available today.

A Testbed Production for BBC Radio 4.

See all episodes from Inconspicuous Consumption