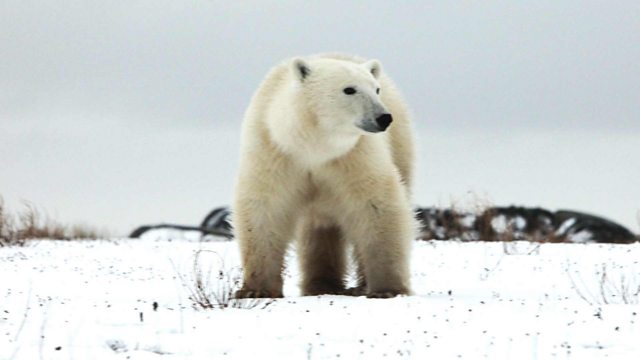 Gordon Buchanan heads to Canada at the peak of bear season to discover what life is really like in the tiny town that's become known as the polar bear capital of the world.

Every autumn, polar bears gather on the shores of Canada's Hudson Bay, waiting for the sea ice to form so they can begin their winter hunt. Right in their path lies the community of Churchill, Manitoba, where, for two months a year, locals have to share their home with the world's largest terrestrial carnivore. Wildlife cameraman Gordon Buchanan heads north at the peak of bear season to discover what life is really like in the tiny town that has become known as the 'polar bear capital of the world'.

Gordon goes on patrol with the town's polar bear cops, works alongside the bin men who have to dodge bears every day at the dump and meets a young woman who was mauled by a bear, right on the main street. Thousands of tourists also pour into town. For them, a trip to Churchill is a chance to catch a glimpse of an endangered icon. For the locals, it is just everyday life. Gordon discovers first hand that keeping everyone safe is no easy feat. The question is, can bears and people ever make good neighbours?