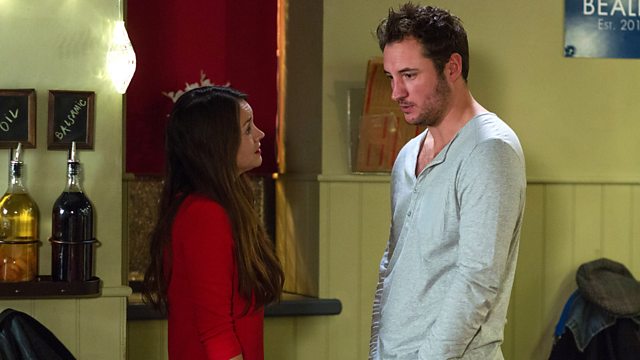 Lee reaches breaking point. Loyalties and motives in the square are questioned.

Having left a note that reads, ‘I’m sorry’ on his car dash board, Lee heads over to the edge of the car park and gazes at the drop below. The parking attendant who met Lee earlier, Karen, approaches him and asks him to step away from the edge. Karen attempts to keep Lee calm and assures him that he can talk to her. Lee confides that he doesn’t feel as though he knows how to enjoy himself –he doesn’t feel like other people. Lee describes to Karen that he feels as though he’s pretending to be a man. Lee ignores a call from Whitney and Karen asks to hear about her. Lee states he thinks a usually optimistic Whitney has started to cotton on to ‘the real him’. Lee describes to Karen how hard it can be to see Mick and Linda as such an incredible couple and to see his siblings doing so well – how can he compete? Lee sobs that he’s seriously let down the people he loves, but Karen continues to assure him that he’s not a bad person.

Lee climbs on to the ledge of wall – Karen desperately bargains with him; assuring him that he’s not alone. Karen empathises – life is hard, but she promises him that he just needs to weather this storm. Karen begs Lee to grab her hand, he eventually does and she hauls him back to safety and embraces him. After making him a cup of tea in her office, Karen hands Lee a ‘Samaritans’ card and reminds him that he’s not alone. Lee arrives home and wakes a sleeping Whitney. She sobs; her period has started, she’s not pregnant. Lee hugs Whitney tight and tells her that they have plenty of time. As Lee holds Whitney and promises that everything will be okay, he firmly grips his Samaritans card…

Martin panics that Max has a secret agenda, but Stacey stands up for him – he’s a lonely man who just wants to re-build his life. As the market traders’ Christmas party gets underway, Max and Roxy arrive. Roxy’s floored when Max states that he’s given up smoking and alcohol. Stacey worries to Lauren that having Max around might not be the best idea, but Lauren is sure that it’s fine. Roxy fills Max in – Ronnie is going to adopt Amy and she’s going to move to Ongar with them for a fresh start. Stacey approaches Max and tells him that she doesn’t like the way people are treating him. Stacey struggles to conceal what she knows – she shares that Phil bribed a juror at his trial. A riled Max ups and leaves, much to Stacey’s panic. Roxy takes out a wrap of cocaine from her purse and pockets it. Emerging from the toilets, Roxy wildly dances with Shrimpy who rejects her and tells her to go home. Roxy makes a phone call and asks to be picked up. Danny and Glenda arrive to collect an intoxicated Roxy; Glenda assures they’ll take care of her.

Sharon and Ian arrive at hospital to see Phil – he receives a text reading that Tony died this morning. Sharon comforts a guilty Phil; Tony wasn’t fit on the day for the liver – it wasn’t his fault. Sharon worries to Ian that she can’t tell him about Max – he’s taken the news about Tony so badly. Max arrives in Phil’s hospital room and declares that he knows about Phil’s bribe. Max holds out his hand to Phil and claims that he forgives him. As Max exits the hospital, he finds a lit cigarette on the floor and plunges it onto his skin, where there are already a number of burn marks.

After flirting all night at the market traders’ Christmas party, Donna and Shrimpy finally share a kiss.