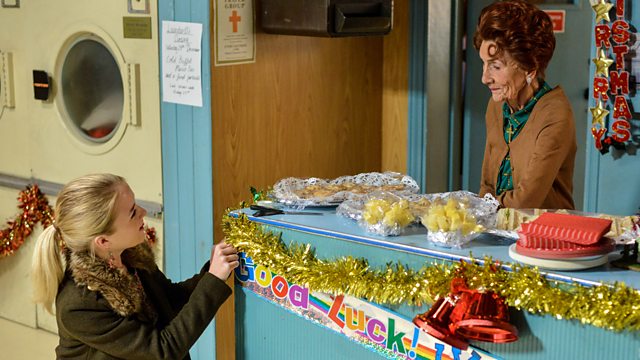 Phil is left to contemplate his actions. Linda receives some devastating news. It is the end of an era for one resident.

It’s Christmas Eve. Sharon continues with her festive preparations but is eventually forced to admit to Ben, Louise and Jay that Phil’s walked out. Having spent the night out alone, Phil’s now with Shirley in a cafe, who berates him for giving up and reveals she feels sorry for Sharon, who’s shown more guts than Phil ever will. In the café, Sharon snaps at Kathy when she mentions Phil. After Louise blames Sharon for Phil’s disappearance and Dennis is disappointed Phil won’t be coming to the play, Sharon pours herself a glass of wine. Meanwhile, Phil lays flowers on Peggy’s grave. Denise finds him at the cemetery, having come to put flowers on Kevin’s memorial. She refuses to leave Phil to wallow. Phil’s scathing about Denise’s pregnancy, while she speculates that Ben and Louise might go off the rails if he dies.

Just like Shirley, Denise accuses him of being gutless and walks away, hand on her bump. Phil heads for the church hall and watches the play from the back. Meanwhile, a woman with a suitcase has arrived in Walford. She sits on Arthur’s bench looking at the Beales’. She tells a passing Lee she’s getting her bearings and when he asks if she knows this place, she replies she thought she did. Later, while binning her turkey outside No. 31, Stacey spots the woman looking at her. Martin doesn’t see the woman but notes Stacey looks like she’s seen a ghost. Returning from the play, Ben, Louise and Dennis are thrilled to find Phil waiting at home but Sharon’s guarded. Phil reveals he’s back for good and that he watched the show, telling Dennis he was great. When Phil and Sharon are alone, he apologises and holds out her Christmas present - an eternity ring. Insisting she needs some air, Sharon heads outside. When the woman from the Square Gardens approaches, Sharon breaks into a smile and embraces her - it’s Michelle...

It’s Arthur’s first birthday and Carmel’s bought him a present. Stacey looks embarrassed when Martin admits to Kathy he took his Bob Cratchit costume home overnight. Jane realises how much this Christmas means to Stacey as she watches her ice the Christmas cake along with a cake for Dot. When Carmel avoids Donna, Kush reminds her Donna will be alone on Christmas Day. At the church hall, Shaki overhears Louise telling Bex it’s about time she set her up with a real man. The last night of the play goes smoothly and during the final musical number Carmel invites Donna for Christmas dinner. Back at No.31, Ian reminisces about his old band, Bex is quiet and Stacey’s annoyed when she discovers a stray black cat in the kitchen tucking into their raw turkey. She makes Martin throw the cat out and bins the bird. Later, a mysterious figure sitting in a car looks at Stacey’s desperate Facebook post - ‘Need a turkey and fast. Can anyone help?’

Abi helps decorate the launderette before heading off to Tanya’s. Despite their best intentions, no-one makes it to Dot’s retirement party, all assuming she’ll be inundated with well wishers and won’t miss them. Alone, Dot packs up the back room and finds a cassette labelled ‘Mrs Branning’. It’s a mix tape made by Heather who can be heard introducing the songs, wishing Dot a Merry Christmas and bickering with Shirley. As it plays, Dot dances and bins the party food. As the tape finishes and Heather signs off, Dot carefully closes up the launderette for one last time. As she leaves, voices from the past, including Jim, Ethel & Pauline, echo in her head. Later, Dot wraps her presents and pours herself a sherry. The radio can’t drown out the sounds of the stray black cat meowing outside in the cold. Eventually, Dot picks up the cat and brings it inside.

When Elaine rings, the Carters pass the phone around, avoiding having a conversation with her. Linda later gets a call from a hospital in Spain – Elaine’s had a stroke. Linda feels guilty for not speaking to her mum that morning. Johnny offers to go to Spain with her and heads off to find flights while Mick comforts a terrified Linda. When the neighbour from 5C knocks to ask about his parcel, Lee stops Whitney from opening the door. 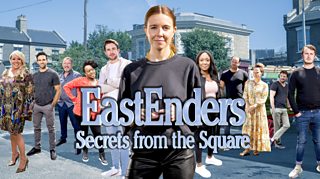 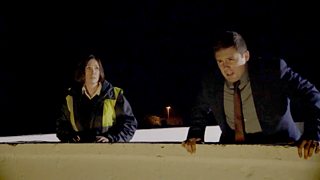