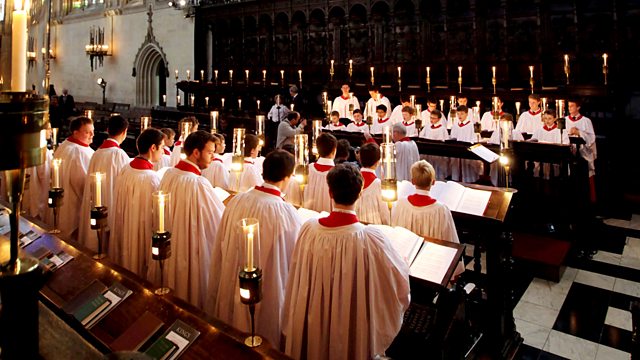 Composer Bob Chilcott on singing Once in Royal David's City as a chorister in the 60s. The Dean of Belfast Cathedral is the Black Santa. Salford welcomes its first Syrian refugees.

Composer Bob Chilcott remembers his starring role in the Nine Lessons and Carols from Kings College Cambridge in the 1960s. For three years running, he was the chorister chosen to open the service with a solo rendition of the first verse of Once in Royal David's City.

A report from religious think tank Theos argues that it is wrong to measure this country's religious commitment by the numbers who go to church. Edward talks to its author Nick Spencer.

Trevor Barnes asks whether traditional Christmas is in decline because of political correctness and the impact of immigration on British churches.

William Crawley meets Belfast's 'Black Santa', the Very Rev John Mann, as he starts his annual marathon fund raising stint on the steps of St Anne's Cathedral. It's the 40th anniversary of this Belfast Christmas tradition.

Kevin Bouquet has been to meet a family of Syrian refugees who are being looked after by the Catholic Charity Caritas and their new community in Flixton.