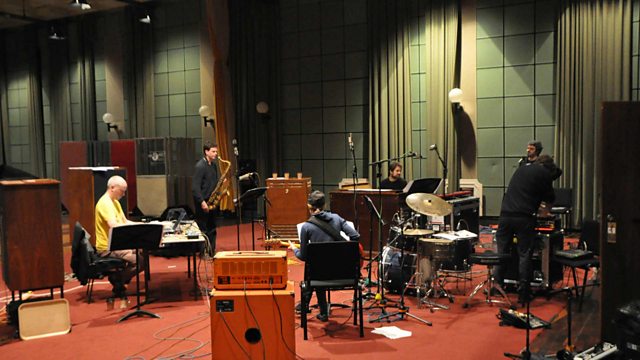 Jerusalem and Other Stories

A group of artists from different backgrounds meet for the first time in the BBC Maida Vale studios to create a unique collaboration. Radio 3 composer in residence Matthew Kaner will write a new piece of music based on texts by Ross Sutherland. Ross re-writes classic stories and poems, including in this case Jerusalem, using an Oulipian writing technique in which every noun and verb gets nudged a certain number of places along in the dictionary, creating new versions of familiar texts. The Golden Age of Steam is an improvising ensemble with James Allsop on reeds, Kit Downes on keyboards, Ruth Goller bass, Alex Bonney electronics and cornet and Tim Giles drums. Matthew Kaner is the Radio 3 composer in residence as part of the station's 70th anniversary celebrations of the Third Programme.

Produced by Rebecca Gaskell and Joby Waldman for Reduced Listening.