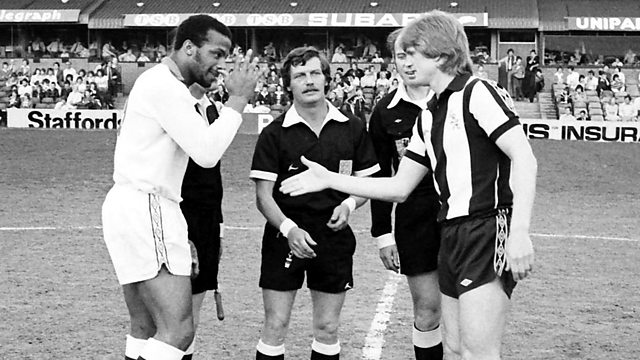 Adrian Chiles looks into an extraordinary game of professional football that took place in May 1979, where an all-white team took on a side comprised solely of black players.

On 16 May 1979, an extraordinary game of professional football took place that, if played today, would very possibly cause uproar, mass protest and a media frenzy. As part of Len Cantello's testimonial at West Bromwich Albion, an all-white team took on a side comprised solely of black players - 'whites against blacks'.

For the white team, it was nothing more than a lighthearted gimmick, but for the black players it represented so much more. It was a game they had to win. Racism was rife, and black people were far from welcome on the pitch, in the stands or in the boardroom.

In this film, presenter Adrian Chiles journeys across England to discover the truths, taboos and real meaning behind this remarkable game. He uncovers rarely seen footage and reunites players from both teams, including Ally Robertson, Tony 'Bomber' Brown, Cyrille Regis and Brendan Batson.

Today, around 30 per cent of English professionals are black. They are role models and superstars, some earning in excess of £100,000 a week. On the surface, everything seems rosy, but how far have we really come? Through encounters with stars like Ian Wright, Les Ferdinand and Dion Dublin, Adrian contrasts the attitudes and conflicts that swirled around that infamous game with the reality of being a black player in the modern era.

See all clips from Whites v Blacks: How Football Changed a Nation (2)