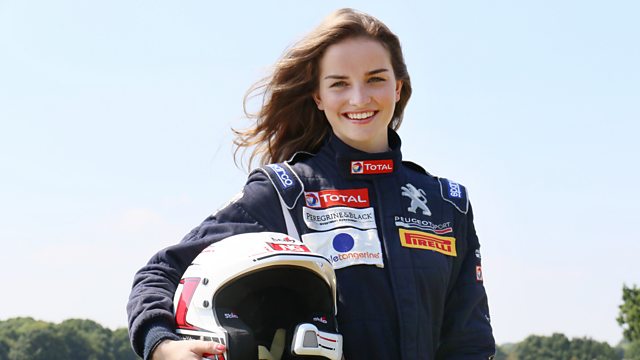 Catie Munnings is an 18-year-old rally car driver. She won the FIA European Rally Championships Ladies' trophy 2016 after only her first season in the sport. At 13 she could execute a perfect handbrake turn and then followed her father Chris, a former rally driver who ran the London Rally School at Brands Hatch, into the sport. When she isn't training in the gym or on the track, Catie has been campaigning to encourage more girls to get into motorsport.

Tom Mangold is a television reporter and author who worked as an investigative journalist on the BBC's current affairs series Panorama for 26 years - its longest serving reporter. In his memoir, Splashed!, he recounts his years in the 1950s and 60s on some of Fleet Street's most ruthless newspapers - a time when chequebook journalism ruled. During his career he covered stories from the Profumo Affair to conflicts around the world including Vietnam and Northern Ireland. Splashed! - A Life from Print to Panorama is published by Biteback.

Nick Yarris spent 23 years in prison, 22 of them on death row, before DNA evidence finally cleared him in 2003. In 1982 Yarris, a 21-year-old car thief and drug addict from Philadelphia, was sentenced to death for the abduction, rape and murder of a young woman. He spent the next 22 years - much of it in solitary confinement - enduring the casual brutality routinely dished out by guards and inmates. During his time in prison he read up to three books a day and studied the details of his own legal case. Later, as the technology developed, he pressed for post-conviction DNA testing which eventually led to his acquittal. The Fear of 13 Countdown to Execution: My Fight for Survival on Death Row by Nick Yarris is published by Cornerstone.

Professor Vanessa Toulmin is director of City and Cultural Engagement at the University of Sheffield. She is also research director of the National Fairground Archive and her collection of circus and fairground material features in a new exhibition at the university. Born into a fairground family herself, her archive also includes material relating to early cinema, world's fairs, magic, wild west shows, menageries, variety, seaside entertainment, and amusement parks. The Spectacle and Wonder exhibition is at the University of Sheffield Library.