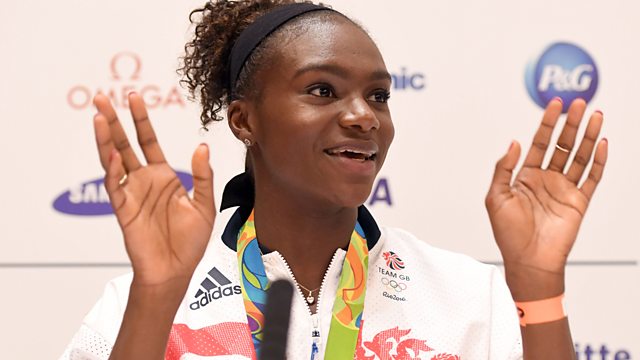 The fastest woman in Britain Dina Asher-Smith, the family lawyers calling for a no-fault divorce and the 'anti-princess' Moana.

Dina Asher-Smith, currently the fastest female sprinter in British history, talks about competing in Rio and the challenges of combining a sports career with university life.

This week we've been hearing from women in their 50s about what this decade brings to marriages and partnerships. 54 year old Erika talks about her same sex marriage with Susan after spending 20 years in a happy heterosexual relationship.

Valley Fontaine and Trichologist Shirley McDonald discuss letting afro hair grow naturally and the damage that chemicals, braids and weaves can cause.

Baroness Ann Taylor, the first female chief Whip, discusses the play The House set in 1974 in the engine rooms of the House of Commons - when she became a whip. She tells us what it's like to see herself portrayed on stage.

Plus the new Disney film Moana stars a female lead that doesn't have a love interest, a crown or a castle and as such has been termed the 'anti princess' by critics. The editorial director of the Sunday Times Eleanor Mills and Helen O' Hara editor at large of Empire Magazine discuss how far Disney has come with its female leads.

India Willoughby, the first transwoman to be a panellist on an all-female talk show. Long-term relationships in your fifties