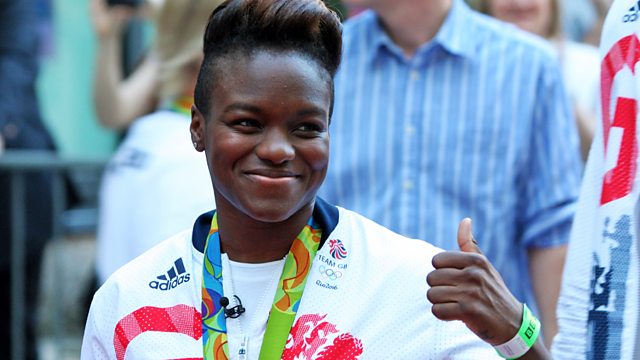 Nicola Adams, boxer and Olympic gold medallist in 2012 and 2016, is interviewed by Kirsty Young for Desert Island Discs.

Kirsty Young's castaway is Nicola Adams. She made history when she won the first ever Olympic gold medal in women's boxing at London 2012, retaining it in Rio 2016. She is the first woman fighter to hold European, World, Commonwealth and Olympic titles.

Having watched classic Muhammad Ali and Sugar Ray Leonard fights on TV as she was growing up, she entered the ring for the first time at a working men's club when she was only 13. When she was 14, her mother contracted meningitis and for several months Nicola looked after herself and her younger brother. She turned to acting in order to help fund her boxing training, appearing as an extra in Coronation Street and Emmerdale. She first represented her country when she was 18. In 2009 it was announced that women's boxing would feature for the first time at the London Olympics, although before her selection for Team GB she fell down stairs and had to recover from a fracture in one of her vertebra.

In 2012 she topped The Independent newspaper's Pink List of the most powerful LGBT people in public life, was made an MBE for services to boxing in 2013 and received a 'Paving The Way' award at the 2016 Mobo awards.

See all clips from Nicola Adams (3)