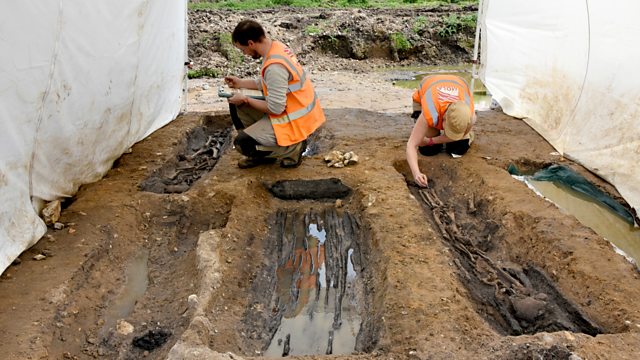 Investigation of what an Anglo Saxon cemetery can tell about early Christianity in the England, and why some Muslim women in Britain are converting to a conservative form of Islam.

The conservative Anglican group GAFCON UK have released a document listing clergy who they say have 'violated' the Church of England's 'authoritative teaching on sexuality'. GAFCON's chairman Andy Lines defends the strategy in a debate with the Bishop of Salisbury Nicholas Holtam who has called the statement, 'outrageous'.

In a report to be released next week the Catholic charity, Aid to the Church in Need, say religious fundamentalism is more 'lethal than ever seen before'. The report's editor, John Pontifex joins Edward.

Alex Strangwayes- Booth reports on the growing number of Gypsies and Travellers in England who say they have given up drinking alcohol and fortune-telling because they've joined a new Christian movement called Light and Life.

The German Islamic organisation that calls itself 'True Religion' was banned on Tuesday after the authorities accused it of recruiting jihadists. Professor Peter Neumann from King's College London tells Edward more about the group.

Dr Anabel Inge is the first researcher to have gained open access to women in the UK Salafi community. Her new book, 'The Making of a Salafi Muslim Woman: Paths to Conversion' has just been published.

The discovery of eighty Anglo-Saxon graves in East Anglia was publicised this week. Kevin Bouquet takes a look at some of the skeletons and finds out why researchers say they are providing new information about early Christianity.

A court has ruled that a terminally-ill 14-year-old girl could have her body cryogenically preserved in the hope she could later be brought back to life. Professor John Harris and Professor John Millbank debate the ethical issues raised by the decision.