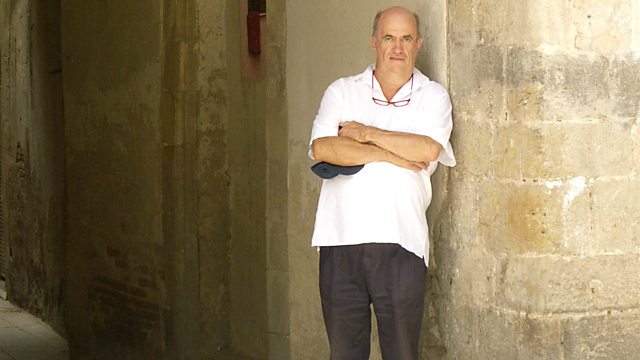 Writer Colm Toibin offers a different vision of Barcelona, a city he first fell in love with as a student. For him, it is a city that has dreamed itself into existence.

Writer Colm Toibin offers us a different vision of Barcelona, a city he first fell in love with as a student. For him, it's a city which has dreamed itself into existence.

In 1975, Colm had just graduated from Trinity College, Dublin. He heard that there were jobs going in a language school in Barcelona, so travelled there, despite his lack of Spanish and knowing little other than it was a port city.

"I was really shocked when I saw the Gothic quarter first. I just thought the streets were extraordinarily beautiful. In those days there was no photography of them, there was no one around at night. I was just amazed by the city".

That sense of amazement has never left him.

He moved away after three years in the city, returning ten years later to write Homage to Barcelona. He now visits every year.

Colm walks us around from the old city through to the new. We hear the impact of the new Pakistani community which has taken over decrepit parts of the old town and turned them into new thriving areas of commerce. Ever the consummate storyteller, Colm weaves in stories of his own time in the city with a description of how the city views itself - built on the remains of a roman city, a city of two languages, a capital without a parliament.

"If you don't have a parliament, then other forms of utterance beside political speeches become dominant. One of those is music and music was immensely important here. For nations attempting to become a state their 'dream life' is often more important than their waking life".

Colm has draws the listener into understanding a city which has taken brave decisions with its architecture, history and narrative.

See all episodes from Reimagining the City