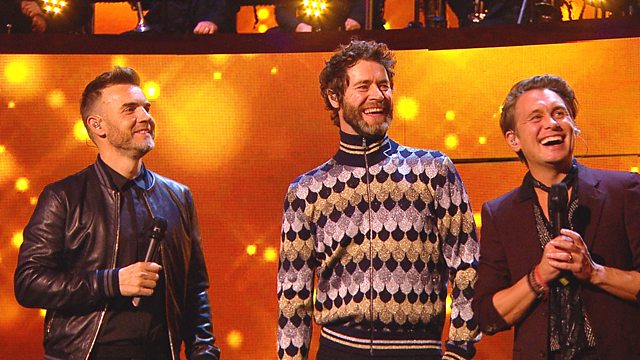 Children in Need Rocks for Terry

A host of music stars perform in a special concert staged at the Royal Albert Hall to honour the inspirational figurehead of BBC Children in Need, Sir Terry Wogan.

A very special concert staged at the Royal Albert Hall to honour legendary broadcaster and the inspirational figurehead of BBC Children in Need, Sir Terry Wogan. Music that Sir Terry loved or had a connection with is at the heart of this celebration and is performed by artists including Take That, Ellie Goulding, Olly Murs, Gregory Porter, Michael Ball, Alfie Boe, Rick Astley, Beverley Knight, Alexander Armstrong, The Vamps, Ward Thomas and Shaun Escoffery.

The concert, hosted by Fearne Cotton and Greg James, also includes Children in Need appeal films and archive depicting Sir Terry's incredible broadcasting career, including a chance to relive one of the classic Radio 2 Janet and John stories accompanied by special illustrations created by Tony Ross. The BBC Concert Orchestra, the Crouch End Festival Chorus and the Brighouse and Rastrick Band are on hand to accompany performances.

The concert is raising money for BBC Children in Need - the charity that Sir Terry held so closely to his heart and which, with his invaluable support and dedication for more than thirty years, has raised more than £840 million for disadvantaged children and young people across the UK.