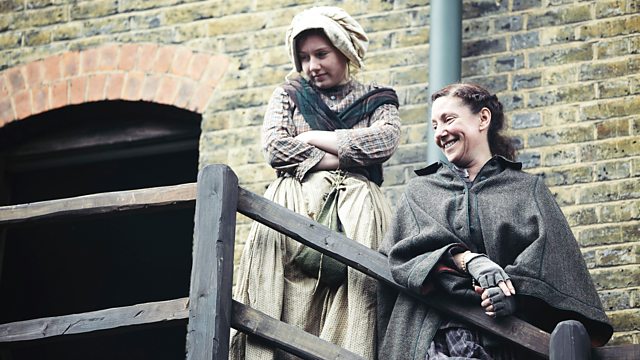 The Victorian Slum
Episode 5 of 5

A group of people move into a recreated Victorian slum. In the final episode the slum dwellers have moved into the 20th century and social change is in the air.

In the heart of the modern East End of London, a Victorian slum has been recreated and a group of 21st-century people are moving in. Michael Mosley joins them to tell the extraordinary story of how the Victorian East End changed our attitude to poverty forever.

In the final episode the slum dwellers move into the 20th century and social change is in the air. Community spirit is embodied by the arrival of the cooperative movement and shopkeepers the Birds have members to look after, rather than customers to profit from.

While some continue to prosper, others come face to face with the poverty still endemic in British cities during the era. The effects of this on children hits home when the slum's kids see photographs of their Edwardian counterparts. But they all get a taste of the great wealth enjoyed by the privileged few when Edward VII's cancelled coronation banquet turns up at their door. The wider world continues to impact on life in the slum and some enjoy a day trip out to the countryside. The men exercise their right to vote and the women of the slum learn what East End women did in the quest for suffrage.

At long last there are state-wide measures designed to alleviate the plight of the poor, and it's time for the slum dwellers to return to life in the 21st century. As they prepare to leave, thoughts turn to the effects of slum clearance on British communities and to lessons that can be learned for the future.