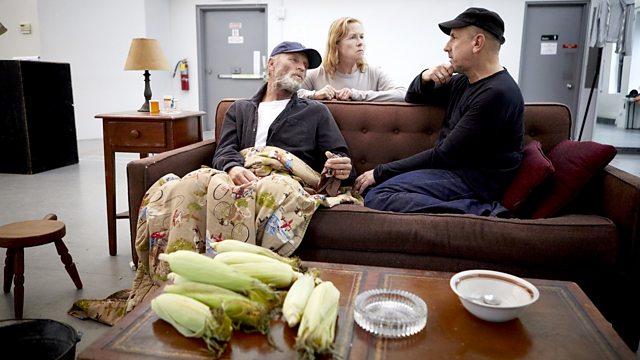 Actor Ed Harris, star of The Right Stuff, The Truman Show and Westworld, on making his West End debut in Buried Child, Sam Shepard's play which won the Pulitzer Prize in 1979, at a time of economic decline in the US when rural people felt forgotten.

As choirs of children and young people around the world sing today to mark Benjamin Britten's birthday, Jonathan Dove on the 12 new songs he's written for the annual event, Friday Afternoons.

Jan Patience, arts writer for The Herald, and Christopher Baker, Director of the Scottish National Portrait Gallery discuss Sir Edwin Landseer's 1851 painting The Monarch of the Glen. Its owners, the drink giant Diageo, had planned to put the painting up for auction but has agreed to gift half the value of the painting, provided the National Galleries of Scotland can raise £4m in four months.

Gavin Turk discusses his first major solo exhibition since 2002, showcasing works from throughout his career, from the life-sized wax figure of Gavin as Sid Vicious to the dirty sleeping bags which he cast to draw attention to the plight of the homeless.

John Wilson and Ed Harris
Buried Child is at the Trafalgar Studios, London until 18 February

Gavin Turk, John Wilson and exhibit
Gavin Turk’s Who What When Where How and Why exhibition opens on 23 November at the Newport Street Gallery in London until March

Friday Afternoons a project to promote singing in schools