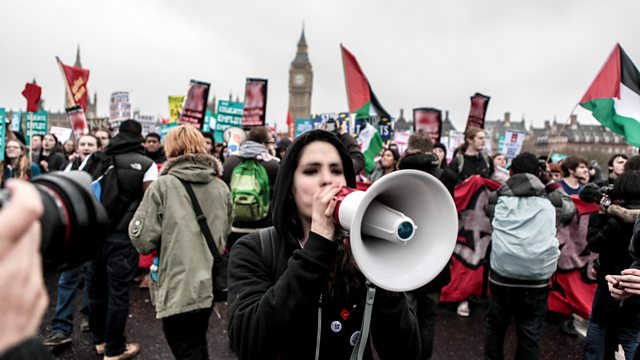 Debates around who should be allowed to speak on campus have been filling recent headlines. Andrew Hussey examines the arguments and history underlying the no platform policy.

The NUS policy of 'No Platform', which blocks members of six proscribed organisations speaking on university campuses, has been the subject of a huge amount of debate recently. Similarly, the related issue of establishing so-called 'safe spaces' within universities, which results in speakers being blocked because their opinions might offend or upset members of the student population, has been widely discussed, with many commentators suggesting the creation of a new generation gap opening up between middle-aged graduates concerned about free speech on campus and younger students who say this older group is out of touch with a politics more concerned with identity than class. As Professor Andrew Hussey explores in this programme, in fact both 'No Platform' and 'Safe Spaces' were created by that older generation, having been born out of the student politics movements of the 1970s and 1980s, and while they were primarily concerned with keeping the violent message of the far right away from campus, they also saw many other speakers either barred from talking or angrily shouted down. Hussey will hear how no platforming, made official NUS policy in 1974, took its inspiration from the disruptive methods of anti-fascist campaigners in the 1930s. Having examined this history, Hussey will set about (with help from contributors including David Aaronovitch, Kaite Welsh and Richard Brooks from the NUS) examining whether there has indeed been a shift in recent times, making the current incarnations of 'no platform' and 'safe spaces' a real danger, as many have suggested, to free speech on University campuses. Along the way he'll consider archive both recent and dating back to the 70s/80s, and examine what for him is one of the most troubling aspects of this whole debate - the use of 'safe spaces' as an excuse to barrack and intimidate speakers through the employment of the 'heckler's veto'.
PRODUCER: Geoff Bird.

Being Bored: The Importance Of Doing Nothing