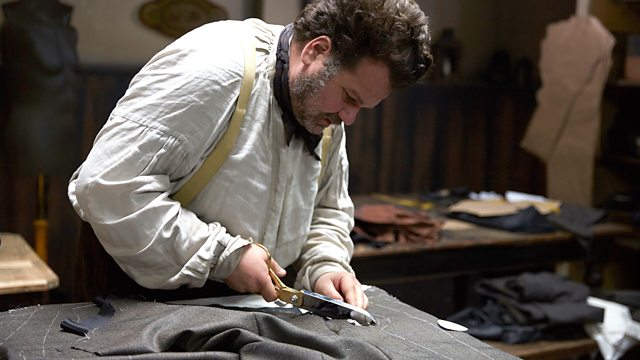 The Victorian Slum
Episode 4 of 5

A group of people move into a recreated Victorian slum. The slum dwellers have moved into the 1890s, when Britain was slowly recovering from an economic depression.

In the heart of the modern East End of London, a Victorian slum has been recreated and a group of 21st-century people are moving in. Michael Mosley joins them to tell the extraordinary story of how the Victorian East End changed our attitude to poverty forever.

The slum dwellers have moved into the 1890s, when Britain was slowly recovering from an economic depression. Cheap foodstuffs and mass-manufactured goods have found their way into the slum's shop, but only some of the residents can afford them.

The Howarths are the lucky ones - they now have a bespoke tailor's shop, and tailor Russell can make good money catering to middle-class Londoners who couldn't afford Savile Row suits. Their relative prosperity means Mandy can turn her attention to being a respectable Victorian housewife.

The Potter family's experience reflects the lives of countless Victorian poor who struggled with low wages and irregular work, but they are offered a lifeline by their neighbour Maria who needs help with her laundry business. But a water shortage during the 1890s makes life even harder, and it forces Maria and her brother John to leave the slum.