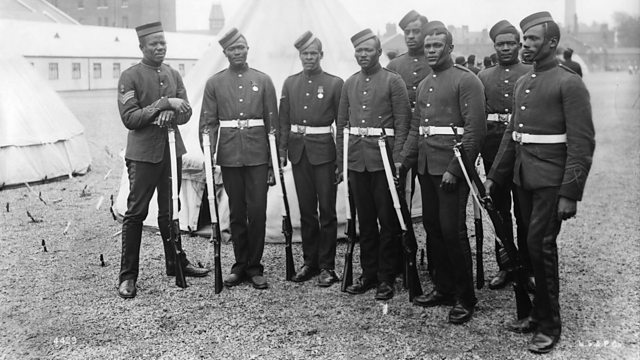 Bernardine Evaristo, Keith Piper, Miranda Kaufmann and Kehinde Andrews discuss what it means to be Black British and how black history can be taught and reflected in literature.

Bernardine Evaristo, Keith Piper, Miranda Kaufmann and Kehinde Andrews consider the question what it means to be Black British and how should a wider history be taught and reflected in literature. New Generation Thinker Nandini Das presents.

Kehinde Andrews is at Birmingham City University where his research includes looking at black activism. He is series editor of Blackness in Britain with Rowman and Littlefield International

Miranda Kaufmann is Senior Research Fellow at the Institute of Commonwealth Studies, School of Advanced Study, University of London. Her book Black Tudors will be published by Oneworld in autumn 2017.

Bernardine Evaristo is the author of prose and poetic novels including The Emperor's Babe and Mr Loverman. She teaches creative writing at Brunel University.

Keith Piper's exhibition Unearthing the Banker's Bones, in partnership with Iniva, is at Bluecoat in Liverpool and runs until 22 January 2017.

Still Loving Victoriana Jokes and All