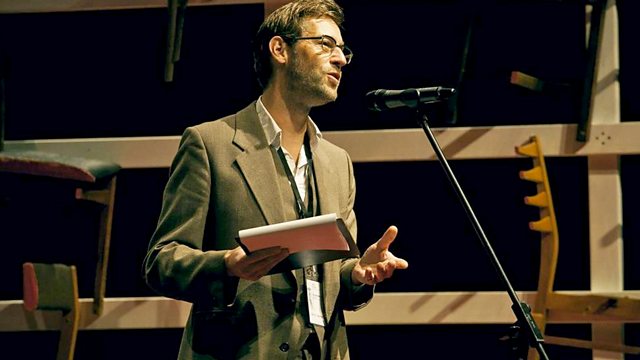 In front of a live audience in Brighton, David Bramwell sets out to prove that anyone can be a good public speaker, enlisting the help of Terry Pratchett and Winston Churchill.

So you think you're bad at public speaking?

Sir Isaac Newton was apparently so dull that no-one came to his lectures at all. Unperturbed, he gave them to an empty room.

You can also be too interesting. American architect and inventor Buckminster Fuller once gave a talk called 'Everything I Know'. It lasted for 42 hours, with the first short break only coming after 24 hours.

Lord Reith established his BBC lectures to 'enrich the intellectual and cultural life of the nation', which sounds old fashioned, but today public speaking is still a surprisingly big deal. Nightclubs may be closing but speaking events are thriving, and on-line lecturers get world-wide followings.

So, can anyone be a good public speaker?

Presenter David Bramwell thinks so. In front of a live audience, at the Catalyst Club in Brighton where he's been hosting speaking events for 12 years, he draws on guests - professional, experienced, novice and totally inexperienced - to prove his point, and provide some entertainment on the way.

What could possibly go wrong?

Down Your Way Revisited