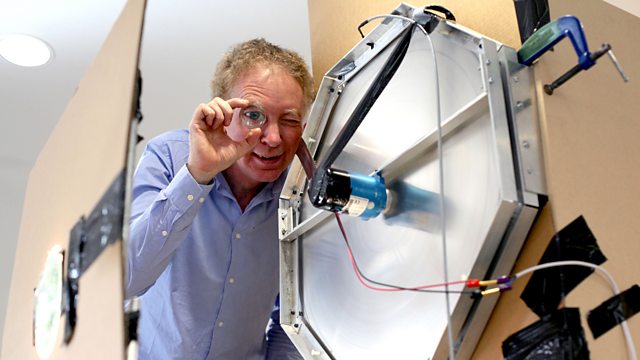 Television's Opening Night: How the Box Was Born

In a unique experiment, Dallas Campbell, Professor Danielle George and Dr Hugh Hunt join forces in an attempt to restage the very first official broadcast on British television, exactly 80 years after it made history.

The very first official broadcast came from Alexandra Palace on 2 November 1936 - but there are no surviving recordings. To find out just what went on, this 21st-century team attempts to piece back together and recreate every aspect of the show from scratch - from the variety acts to the cameras - using the original technology and filming techniques to capture the excitement of the day.

It's not going to be easy. At the dawn of TV, two rival camera technologies competed live on air to take control of the fledgling industry. The system that went first on opening night was a seven-foot tall mechanical monster built by John Logie Baird's company. It was called the 'Flying Spot' and at its heart was a huge steel disc spinning almost at the speed of sound - meaning mechanical engineer Hugh had better be careful as he attempts to resurrect it. Meanwhile, Danielle finds out how the rival and highly experimental, all-electronic camera system had problems of its own.

The team uncovers the mixed influences of high-minded radio and bawdy variety shows on early TV, at a time when it was still a science experiment and not a mass medium. They seek advice from pre-war television pioneers, including Logie Baird's former assistant, now aged 104 but still full of handy tips about how to build a mechanical camera.

Dallas learns just how much harder his job would have been 80 years ago, when the very first television announcer Leslie Mitchell was plastered in bizarre make-up and given a cue for 'action' that bordered on physical assault! Dallas also meets one of the performers in front of the camera on the original night - now in her nineties - to find out what it was like to be part of television history.

As they prepare for broadcast, the team discovers a story of cogs and gears, electron beams and dancing girls - and one mad night that, for better or worse, helped invent television as we know it.