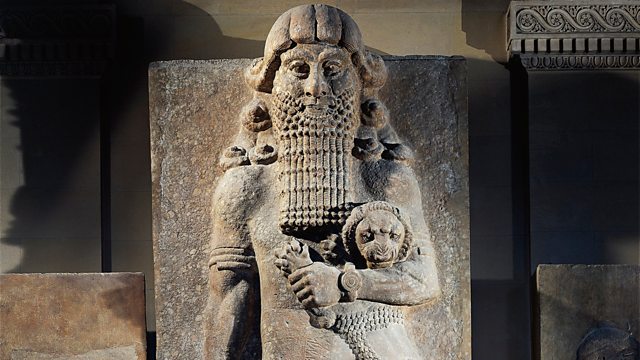 Melvyn Bragg and guests discuss the Gilgamesh Epic, often described as the earliest surviving great work of literature, with origins in Mesopotamia in the 3rd millennium BC.

"He who saw the Deep" are the first words of the standard version of The Epic of Gilgamesh, the subject of this discussion between Melvyn Bragg and his guests. Gilgamesh is often said to be the oldest surviving great work of literature, with origins in the third millennium BC, and it passed through thousands of years on cuneiform tablets. Unlike epics of Greece and Rome, the intact story of Gilgamesh became lost to later generations until tablets were discovered by Hormuzd Rassam in 1853 near Mosul and later translated. Since then, many more tablets have been found and much of the text has been reassembled to convey the story of Gilgamesh, king of Uruk the sheepfold, and Enkidu who the gods created to stop Gilgamesh oppressing his people. Together they fight Humbaba, monstrous guardian of the Cedar Forest, and kill the Bull of Heaven, for which the gods make Enkidu mortally ill. Gilgamesh goes on a long journey as he tries unsuccessfully to learn how to live forever, learning about the Great Deluge on the way, but his remarkable building works guarantee that his fame will last long after his death.

Andrew George
Professor of Babylonian at SOAS, University of London

Frances Reynolds
Shillito Fellow in Assyriology at the Oriental Institute, University of Oxford and Fellow of St Benet's Hall

Martin Worthington
Lecturer in Assyriology at the University of Cambridge

Frances Reynolds at the University of Oxford

Martin Worthington at the University of Cambridge

The Babylonian Mind by Irving Finkel at the British Museum

Extracts from Gilgamesh in the original language – SOAS, University of London

The Flood Tablet - BBC - A History of the World

David Damrosch, The Buried Book: The Loss and Rediscovery of the Great Epic of Gilgamesh (Holt, 2007)

Irving Finkel, The Ark before Noah: Decoding the Story of the Flood (Hodder & Stoughton, 2014)

Andrew George (trans.), The Epic of Gilgamesh: The Babylonian Epic Poem and Other Texts in Akkadian and Sumerian (Penguin, 2003)