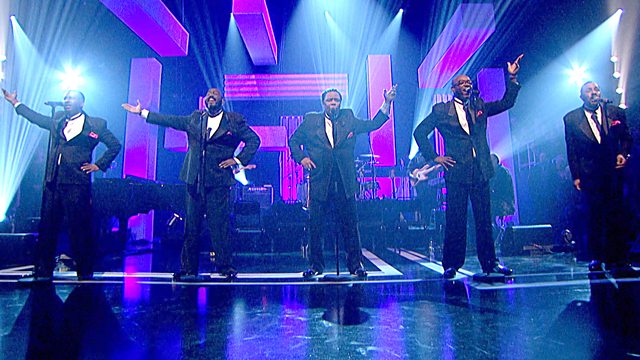 Joining Jools on the sixth show of the series is St Andrews-raised singer-songwriter KT Tunstall, who plays a couple of songs from her recent album Kin, a major return to form with rousing melodies and a new positive spirit.

From Birmingham, Alabama, the retro-soul stylings of the Stax-influenced St Paul & The Broken Bones, led by the extraordinary vocals of Paul Janeway, with songs from their second album Sea of Noise.

London electro-pop four piece Teleman make their debut on the show with a couple of tunes from their much acclaimed LP Brilliant Sanity.

Also making her debut on the show is Canadian-born singer-songwriter Haley Bonar, who makes piercing, contemplative songs with pop sensibilities. Her latest album Impossible Dream looks at the ways we learn to live within our own skin and try to look back with as little regret as possible.

Making their debut on the show a mere 57 years after they launched - step forward and shimmy 5-piece vocal harmony legends The Temptations, who are lead by original member Otis Williams. Williams's Temps will reprise a couple of their classic hits around Jools's piano.

The Temps are on the eve of a major British tour with fellow Motown legends The Four Tops, who first came together in 1953! The last original member and current leader of The Four Tops Duke Fakir chats to Jools about the quartet's glory years.

Making their TV debut is Let's Eat Grandma, an experimental pop outfit from Norwich consisting of best friends Jenny Hollingworth and Rosa Walton. Singers and multi-instrumentalists, the two teenagers have been making music together since they were thirteen and their music possesses a childlike, eerie, almost unsettling quality, and their debut album I, Gemini has been described as 'a freaky and surreal debut'.