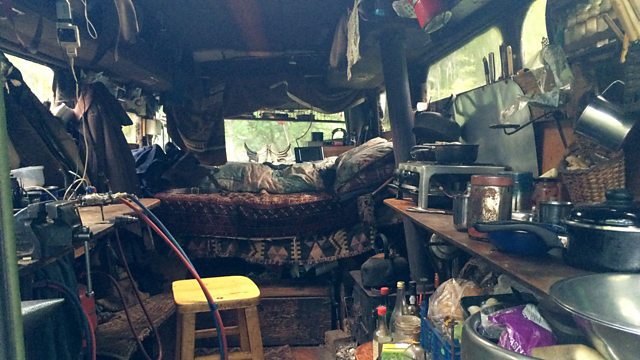 Off Grid in Mid-Wales

Guest presenter Ian Marchant meets people who choose to live off-grid in his part of mid-Wales. They love the carbon-light adventure of it, the freedom, the being out of doors.

Guest presenter Ian Marchant meets people who live off-grid in his part of the world, near Presteigne in mid-Wales.

There's Bob, who started his off-grid life on the hippy trail in the sixties, driving over-land to Afghanistan and bringing back the first Afghan coats to the London fashion scene. Now he lives in a wood, still making jewellery and living in his van. For him, there's adventure in every aspect of his life, even the washing up, especially if you have to do it in 'horizontal snow'.

Goffee-the-Clown has built himself an idyllic cottage, but somehow he can't bring himself to move in. He prefers the simplicity of his pale blue retro caravan with its wood-burner and collection of spider-webs, idyllically situated on the bank of the River Usk.

There are the Hoopers, a family of four who run an efficient small-holding as carbon-lightly and self sufficiently as is possible. They did have a brief spell in a house, but despite the fascinations of the washing machine, they were delighted to be back living off-grid up a mountain.

And there's Briar, who has just moved in to her new home, a yurt she has built herself, snugly insulated with duvets and brightly-coloured rugs and fabrics. Everything she needs is to hand, and there's water from the spring nearby. Knowing she can rely on her own strength and skill to live anywhere makes her happy and gives her confidence. And the cost? This luxurious construction cost her roughly twenty quid to build.

Wild Boar in the Forest of Dean