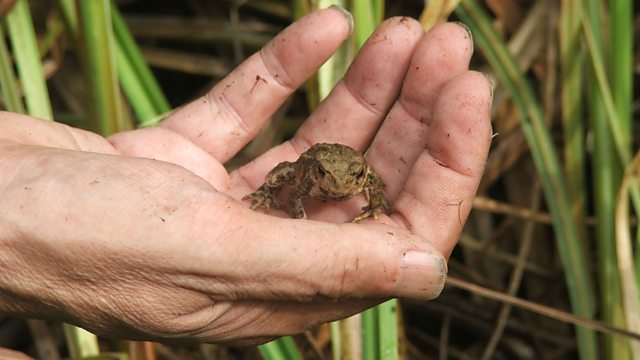 'Like a bean bag with eyes' is how Brett Westwood once described a natterjack toad, but as he discovers in this programme, the toad is much more than a figure of fun.

Unlike frogs, toads have long suffered from a bad press. Thomas Pennant, a Welsh naturalist described them as "The most deformed and hideous of all animals .... its general appearance is such as to strike one with disgust and horror" in 1776, and Shakespeare didn't do much for their PR when he had the three witches toss the toads into the charmed pot in Macbeth. And whilst its true that Toads have glands which contain toxic substances which deter predators, they have also been viewed as evil spirits and a widely held belief concerned the toadstone - a jewel that was supposed to be found inside the toad's head, which could protect the wearer from foul play. Kenneth Grahame did his best to dispel many of these myths when he introduced his readers to the loveable rascal Mr Toad in Wind in the Willows, although this toad terrorised everyone with his wreckless driving! This is somewhat ironic given that thousands of toads are killed every year on our roads by cars as they return to their breeding ponds. But as Brett Westwood discovers, help is at hand - as huge number of volunteers venture out every year to gather up toads from the roads and release them in nearby pools and lakes, to breed once again. All this and an encounter with the bootle organ as Brett explore our relationship with the Toad. Producer Sarah Blunt.

Peter Gahan is the Reserve Manager for Natural England’s Ainsdale National Nature Reserve where Natterjack toads can be found. These are rarer then Common Toads but they sing so loud the locals call them the Bootle Organ.

Since the early 1990s Phil Gates has developed expertise in Science Communication and Science Journalism. He has written science features for the Sunday Post; Northern Echo; the Guardian; the Independent on Sunday; BBC Gardeners’ World (monthly column 1992-2005); BBC Wildlife; Kew magazine; Journal of the Royal Horticultural Society (The Garden); She; Australian Geographical Magazine and New Scientist and he has been a regular columnist for BBC Gardeners’ World magazine and BBC Wildlife.

He has written 17 science books for young people and has won or has been shortlisted for many literary awards. Phil has a strong interest in wildlife conservation and is a former chairman of Durham Wildlife Trust and past President of the Northern Naturalists' Union. He is on the editorial advisory board of BBC Wildlife magazine. His book Spring Fever, published in 1992, was an early prognosis for the impact of climate change on Britain’s flora and fauna that contains a number of predictions that have since been borne out by experience.

Find more from Phil at A Digital Botanic Garden, Beyond the Human Eye, and Cabinet of Curiosites.

Silviu has has worked as a herpetologist on research projects, primarily in Romania, Honduras and Indonesia. He joined Froglife in 2011 to take up the new post of Conservation Coordinator.

Since 2013 he has been co-supervising Catia Matos on a PhD investigating the effectiveness of road tunnels as mitigation for the great crested newt (Triturus cristatus). Silviu is also collaborating with Michael Hartup, a former BBC engineer, on using camera traps as automated systems for tunnel monitoring for herpetofauna.

Andy Ryder is Chair of the Avon Reptile & Amphibian Group which seeks to promote reptile and amphibian conservation throughout the counties of Avon and North East Somerset. Andy organises the Toad patrols in the village of Bitton near Bristol.

Roger holds graduate and post graduate degrees in geology at Queen Mary, University of London. He was a demonstrator in Geology, University of Keele and Principle Scientific Officer British Geological Survey.

He worked as a volunteer and then Geological Consultant at the Royal Albert Memorial Museum (RAMM) on retirement. He also works on geological applications to archaeology, particularly pottery and stone tools.