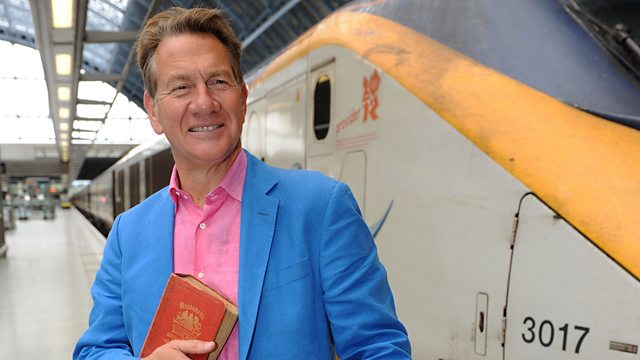 Transylvania to the Black Sea

With Bradshaw's 1913 Continental Railway Guide in hand, Michael Portillo ventures east through Romania. He uncovers an unlikely fan of his Bradshaw's.

With Bradshaw's 1913 Continental Railway Guide in hand, Michael Portillo ventures east through Romania. He encounters a bloodsucking vampire in Transylvania and brown bears in the Carpathian forest before visiting a fairy-tale castle with modern conveniences in Sinaia, striking oil in Ploesti, tapping into the nation's musical soul in Bucharest and loading cargo from a 100-foot crane in Constanta.

Travelling through what was, at the turn of the 20th century, one of Europe's youngest nations, Michael sinks his teeth into a Victorian gothic best-seller and uncovers an unlikely fellow fan of his Bradshaw's. The beauty of the Carpathian mountains with their snow-clad granite peaks, gorges and lakes appears to him unchanged from their description in his 100-year-old guidebook, and he is privileged to catch sight of some of the wild brown bears and wolves who continue to live in the region's last stretches of unbroken forest.

Like the railway traveller of a hundred years ago, Michael discovers a land full of surprises. In Ploesti, he helps out in the world's first oil refinery and at Sinaia, he discovers a fairy tale-castle with the most modern conveniences. In the Romanian capital, Bucharest, the nation's leading violinist Alexandre Tomescu introduces Michael to the music of his country's greatest musician and composer, George Enescu, in a private recital with his Stradivarius.

On the shores of the Black Sea at Constanta, once the scene of intense pre-World War I diplomacy between Romanian and Russian royalty, Michael explores what is now emerging as Europe's largest grain port.

See all clips from Transylvania to the Black Sea (2)