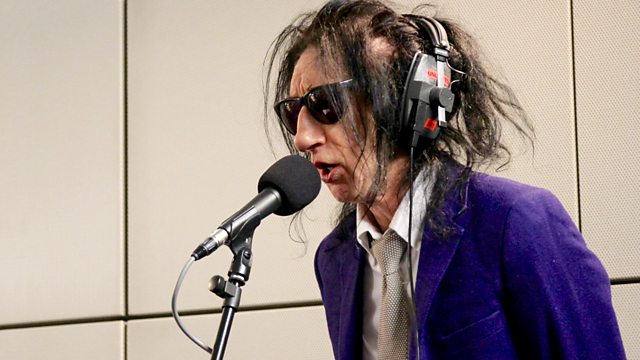 Mark Radcliffe presents solo and is joined by poet Dr John Cooper Clarke and singer-songwriter Hugh Cornwell, who play a live set in the studio.

Mark presents the show solo, and is joined by acclaimed poet Dr John Cooper Clarke and esteemed singer / songwriter (and founding member of The Stranglers) Hugh Cornwell, who are here to play a live set in the Salford studio. After meeting a few times over the years on the punk circuit, Hugh had a brainwave: "I was listening to 'MacArthur Park' by Richard Harris, and I suddenly got this bizarre idea in my head, I suppose because I'd just had dinner with John a couple of weeks before. I thought 'Wouldn't it be weird, John with his very distinctive voice doing that song?' So I rang him up and said 'Would you be interested in doing it?' and he said 'Yeah, sure, why not?'. With tracks by the like of Lieber & Stoller, Jimmy Webb, Ricky Nelson, Richie Valens and Conway Twitty, "This Time It's Personal" sees the duo paying their respects to the music that had played such a part in their musical coming of age.

PLus YOU, the actual listener, will have the chance to be on the wireless by taking part in the never-ending Chain of conjoined records â€" or huddle round the office DAB speaker with your choice of afternoon beverage to gain victory in todayâ€TMs Teatime Themetime.