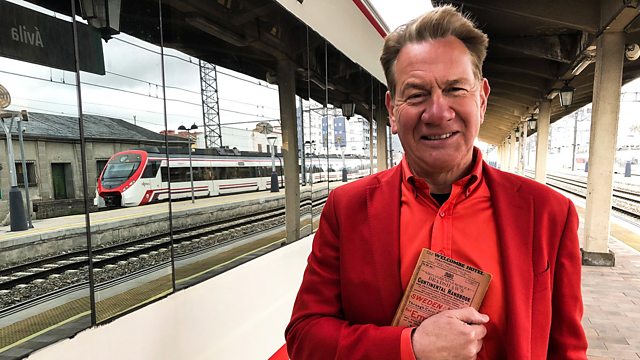 Armed with his railway guide, Michael Portillo travels from the Swiss Alps to Lake Geneva. He is caught up in a war zone and rescued from an avalanche by a puppy.

Armed with his 1913 railway guide, Michael Portillo travels from the Swiss Alps to the shores of Lake Geneva. Along the way, he is caught up in a war zone with the Red Cross and rescued from an avalanche by a St Bernard puppy. He takes to the skies in a vintage biplane to retrace the epic journey of the pioneering pilot who was first to fly over the Alps and tries his hand at watchmaking, James Bond style.

Following in the footsteps of Edwardian railway travellers, Michael discovers a nation already famous for its neutrality when the rest of the continent was on the brink of war. In Zermatt, Michael learns how intrepid early 20th-century British mountaineers turned Alpinism into a fashionable sport for the rich and famous, and how one group of British climbers came to grief on the Matterhorn. At Martigny, Michael puts his faith in St Bernard after he is buried in snow. Will four-year-old puppy Easy rise to the challenge?

He discovers in Montreux how a ballet caused a riot and how a prisoner became immortalised in verse. Fortified by railway wine and Swiss fondue, Michael makes his way to the capital, Bern, where in a 1930s biplane, he follows in the slipstream of the Swiss pilot Oskar Bider, first to fly across the Alps. At Biel or Bienne, Michael tries his hand at watchmaking and learns how a timekeeping innovation by Omega became indispensable in the trenches of World War I. Arriving in Geneva, Michael is thrust into tense conflict training at a military checkpoint as he explores the city's famously international character, beginning with the International Committee for the Red Cross.

Transylvania to the Black Sea—Series 5