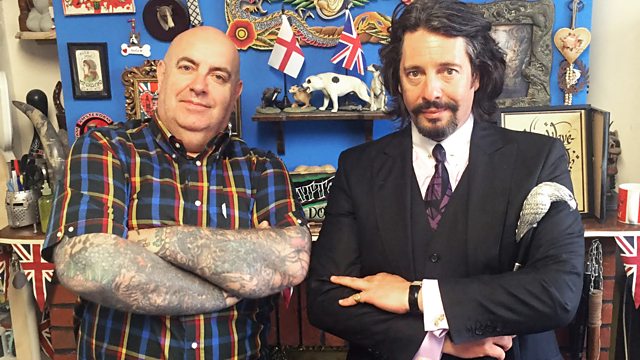 The Intimate Art of Tattoo

Laurence Llewelyn Bowen considers the exponential rise in tattoos across the UK. He looks at the many and various factors that are driving people to get tattooed now.

In the first of a two-part series, Laurence Llewelyn Bowen considers the exponential rise in tattooing across the UK. With as many as 25% of the population now tattooed, he asks why we're acquiring permanent inkings.

While once the markers of transgression, of the exotic, of forbidden sexuality, Laurence looks at the many and various factors that are driving us to get tattooed now.

From commemorative images of deceased family members, to political scenes marking the centenary of the Easter Rising, our desire to permanently mark our bodies is striking. Laurence meets Lal Hardy who, over five decades as one of the UK's best tattoo artists, has watched the medium move from the backstreet parlour to the high street studio. "Human beings have always wanted to change the way they look, from the earliest beings to now," he says.

At the Great British Tattoo Show, people of all generations descend upon London's Alexandra Palace to meet some of the industry's top talent and plan their next tattoo, from watercolour portraits of their pets to dotwork renderings of Hollywood actors.

Dr Matt Lodder, a heavily tattooed lecturer in contemporary art at the University of Essex, describes the emergence of the British tattoo industry in the late 19th Century. Sutherland Macdonald, the first professional tattooist in London had an upper class clientele with an interest in the Orient.

But despite the tattoo's posh history, they still have the power to appal the middle classes. Social historian Kathryn Hughes makes no excuse for her fear of permanent inkings and the writer and broadcaster Bidisha discusses her regret at getting a full sleeve on her left arm.

See all episodes from The Intimate Art of Tattoo