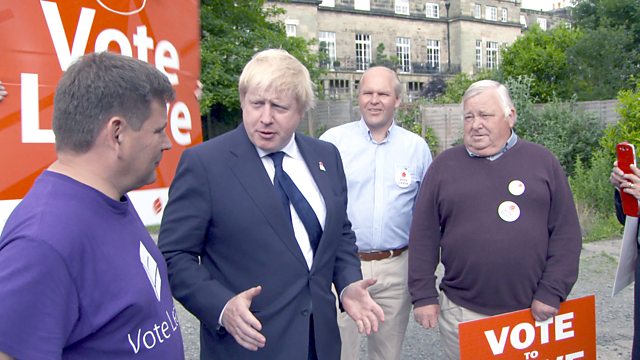 The real story of the campaign for Brexit, with behind-the-scenes access documenting every twist and turn of the Leave campaign and the Conservative leadership race that followed.

On 20 February, prime minister David Cameron officially set the date for the British public's vote on whether to remain a member of the European Union. What followed was months of campaigning, debate, claims and a political drama fought out in the press, which resulted in the resignation of David Cameron and the subsequent Conservative leadership contest. But what did the British public not witness?

During this historic political event, BBC Two had behind-the-scenes access to document every twist and turn of the Leave campaign and the race for the Conservative leadership that followed. Bafta winner Patrick Forbes filmed from the early days until the extraordinary events after the vote.

The unseen footage lays bare the ambition, passion, strategy and animosity that existed and propelled the Leave campaign. This is the real story of the campaign for Brexit as told by a host of key people as they lived and breathed it - whether it is Brexiteers Nigel Farage, Gisela Stuart and Liam Fox or Remain's Michael Heseltine and Alan Duncan - all speaking with a candour and frankness rarely seen on television.