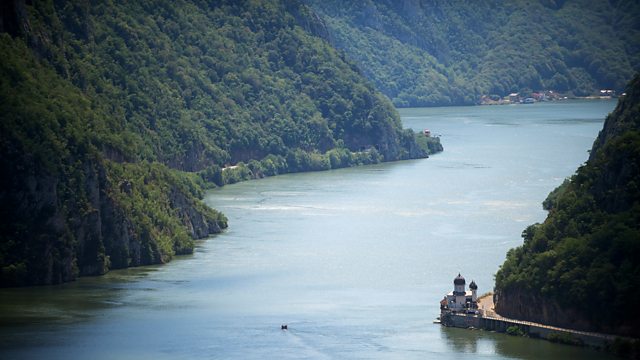 The Danube Ain't Blue, It's Green

Ringtones and muzak have made it universal and, in Vienna, he hits the tourist trail and finds that everyone knows it, from South Koreans to Californians, while hard-working musicians there can play it over 400 times a year. It's always performed as the inevitable encore at the New Years' Day Concert in Vienna, and Franz Bartholomey, former principal cellist with the Vienna Philharmonic Orchestra, thinks it's "simply the most beautiful waltz in the world".

Rainer touches on the finer points with conductor Alfred Eschwé as they sing their way through it, discovering that it's not just "da-da-da-da-daa, tchk-tchk, tchk-tchk" - but Strauss combined five separate waltz melodies in the piece.

He also finds out that, as Spike Jones described it in his musical parody, the waters of the Danube aren't blue, they're green, and a rather murky green at that.

Also murky was one period of the waltz's history, when Goebbels decided that the music of Strauss was an ideal palliative for the Nazi war machine, though he had to remove all traces of Strauss's Jewish ancestry in order to make the music acceptable.

Musician Ernst Theis and Strauss biographer John Suchet trace the Blue Danube's history, while Piers Lane shows how it has become one of the pianist's favourite encores in its devilish transcription by Schulz-Evler.