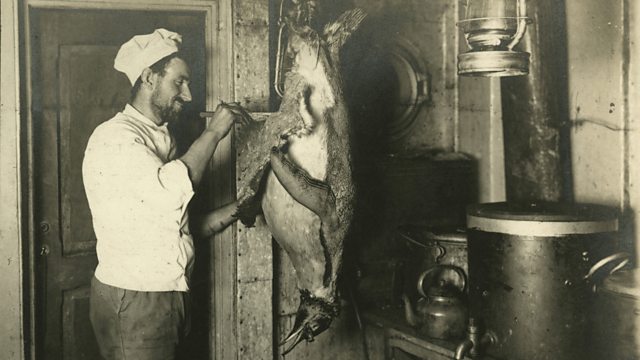 September 1916: Ernest Shackleton returns to rescue his men from the ill-fated Endurance Antarctic expedition. Gerard Baker tells the story of a chef who kept all of them alive.

Charles Green. Chas to his family, 'cook' to his colleagues. A young baker whose sense of adventure drew him to a career cooking on the sea. You may never have heard of Charles, but you certainly will have heard of an expedition on which he played a crucial role...

Charles was cook for the crew of the 1914 Trans-Antarctic Expedition led by Sir Ernest Shackleton. A disastrous expedition which ended up lasting for more than two years. The men were forced to camp on moving ice flows, and eventually a remote Antarctic beach on Elephant Island. But against all odds, every man on Shackleton's ship The Endurance survived. In August 1916, the men were rescued. They were on the edge of starvation.

During their time on the ice, Charlie Green cooked tirelessly using his creative flair to concoct meals out of exceptionally meagre means. His food kept the men alive. He went back to the Antarctic with Shackleton on the expedition which would be Shackleton's last. But then, despite living until the 1970s, he faded into obscurity. Known only for slide shows that he gave locally with the well-known images of the expedition.

One hundred years on, another Antarctic chef Gerard Baker, uncovers the extraordinary life led by Charles Green and his version of two years cooking for the men of the Endurance. One of the greatest survival stories of all time.