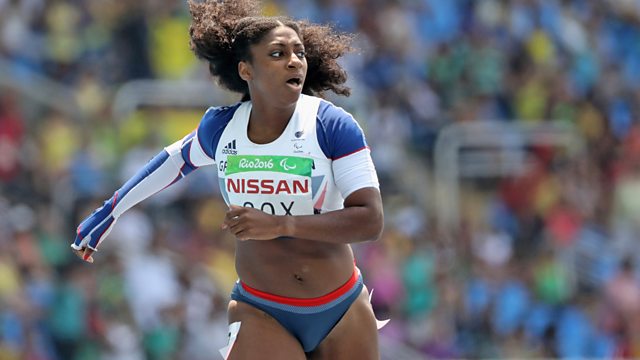 Kadeena Cox was a promising able-bodied runner hoping to make Rio's Team GB when two years ago she was diagnosed with multiple sclerosis. Not deterred, she switched her focus to the Paralympics, winning four medals, and becoming the first British Paralympian for 32 years to win gold medals in two separate sports - running and cycling. She was also GB's flag bearer at the Paralympics closing ceremony.

Are women easy targets when it comes to cost-saving restrictions on access to health services such as cancer drugs or IVF treatment? Baroness Delyth Morgan of Breast Cancer Now and Allyson Pollock, Professor of Public Health and Policy at Queen Mary University of London, discuss.

Greta Scacchi talks about her life and latest stage role as long-suffering wife Phoebe in the John Osbourne play, The Entertainer. It tells the 1950's story of clapped-out vaudevillian, Archie Rice, who clings to the vestiges of the music hall while the country's politics and Suez crisis create drama in his family life.

Last year Nancy and Baz Ashmawy won an International Emmy for 50 Ways To Kill Your Mammy, in which Baz issues a list of dangerous activities for his 73 year-old mother to perform. The third series starts on Monday, and Baz takes his mother and four new Mammies around the world for more death defying stunts. They talk to Jenni about their thrill-seeking mother and son relationship.

The trench coat is the final item in our fashion staples' wardrobe. Fashion historian Amber Butchart and Kate Finnigan, fashion features director at the Telegraph, discuss how a military garment became the inspiration for a fashionable lightweight coat.