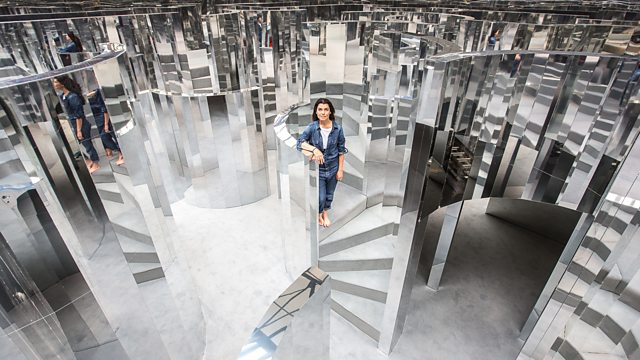 Set designer ES Devlin who created a giant tongue for Miley Cyrus to slide down on tour. Having a partner with early onset dementia. Nujeen Mustafa. Fashion staple: white shirt.

The set designer Es Devlin has worked for Beyonce, Adele, Lady Gaga and Jay Z and created a giant tongue for Miley Cyrus. She also helped to create the sets at the Olympic ceremonies in London 2012 and Rio 2016. She talks about her first solo installation 'Mirror Maze'.

Seventeen year old Syrian Nujeen Mustafa's story first came to the world's attention last year when the BBC correspondent Fergal Keane interviewed her as she was trying to cross from Serbia into Hungary. Nujeen has cerebral palsy and uses a wheelchair. She had no formal education in Syria but taught herself English by watching television. Now living in Germany, she's published her story 'Nujeen'.

Chris Graham, a former British Army soldier was diagnosed at the age of 38 with a rare form of Alzheimer's disease that had already killed his father in his forties and put his brother in a nursing home aged 43. Chris has written a memoir 'Five Minutes Amazing'. He and his wife Vicky discuss the impact of the diagnosis on their relationship.