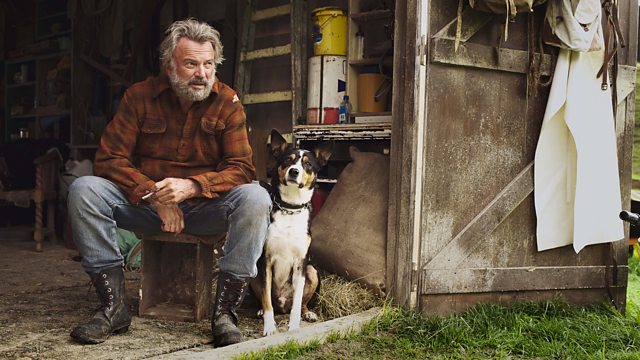 Sam Neill talks about Hunt for the Wilderpeople and his mentor James Mason; novelists Sharon Bolton and Stephanie Merritt on the importance of travelling to their books' settings.

In his new film Hunt for the Wilderpeople, Sam Neill stars as a grumpy New Zealand farmer forced to go on the run with a Maori kid who thinks he's a gangster. He discusses the film, his acting mentor James Mason and starring in one of the lowest grossing feature films ever.

Frederick Forsyth has announced he's stopping writing, partly because he's now too old to travel to the settings of his thrillers. Sharon Bolton, who researched the Falkland Islands from Britain for her novel Little Black Lies, and Stephanie Merritt, who visited Paris and Prague for her historical fiction thrillers, discuss whether writers must travel to their books' settings to really capture the feel of a place.

Nicholas Marston, Professor of Music Theory and Analysis at King's College, Cambridge talks about a recently discovered musical 'doodle' by Beethoven which might tell us more about his most celebrated works, the Emperor Concerto.

Writer Michael Bird has written a book called Vincent's Starry Night which sets out to ignite young people's imagination through storytelling. Teacher Caroline Osborne believes a proper understanding of art history is a life skill which is as important as literacy and numeracy. Both join Samira to discuss how best to teach children about the history of art.

Hunt for the Wilderpeople is in UK cinemas from Friday 16th September, certificate 12A.
Image:  Presenter Samira Ahmed with Sam Neill in the Front Row studio.

Sharon’s latest book is Daisy In Chains, out in October.

How Best To Teach Art History

Vincent Starry Night and Other Stories by Michael Bird and illustrated by Kate Evans is published by Laurence King.